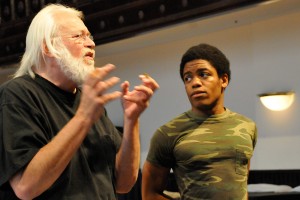 The work of famed Japanese writer Haruki Murakami has been captivating readers around the globe for decades. Translated into dozens of languages, Murakami’s stories are a delicious blend of dream and reality, the tangible and the ethereal, populated with characters both fantastically bizarre and starkly human. Director Frank Galati, whose stage adaptation of Murakami’s “Kafka on the Shore” opens at Steppenwolf Theatre this week, describes the writer’s world as “a very strange, liminal place somewhere between illusion and reality; highly theatrical, characters larger than life; issues that are historical and geopolitical and psychological…[and] tremendously funny. He has a fabulous sense of humor, a real zest for life, a tremendous interest in the uncanny, the grotesque. And he is a very serious thinker, too, about matters of life and death, mortality, memory, sexuality, dreams. I just love him.”

For Galati—who won a 1990 Tony Award for his adaptation of “The Grapes of Wrath” (which has subsequently been translated into dozens of languages and performed by theater companies around the globe)—bringing literature to the stage has been a lifelong pursuit. And Murakami seems to have a particular hold on the renowned actor, director and writer: “I find [his] world somewhat irresistible,” says Galati. Indeed, Kafka is his second round with the author’s work—his 2006 production “after the quake,” based on Murakami’s short-story collection inspired by the 1995 Tokyo gas attacks, premiered at Steppenwolf to great acclaim, and enjoyed highly successful runs at several regional theaters including Berkeley Repertory.

In contrast to the concise narrative of Murakami’s short stories that make up “quake,” “Kafka” is a 600-page epic tale of  “a young boy’s fateful journey that crosses the boundaries between imagination and reality” that would require a days-long performance to tell in full. This is where the work of the adapter becomes akin to that of the sculptor, the miner: “[This book] has many comedies hidden inside it, and the process is a matter of digging them out and putting them together. Finding the play inside of the novel—its an adventure,” says Galati. “It’s full of fun—strange twists and turns, coincidences, reveals, discoveries and switcharoos. Its an adventure and a coming-of-age novel. Much like [Mann’s] ‘Magic Mountain,’ or ‘Catcher in the Rye’—which Murakami translated into Japanese just before beginning work on ‘Kafka,’ it’s reminiscent of ‘Huckleberry Finn’ and ‘Tom Sawyer’ and ‘Candide.’ And it’s an Oedipal narrative [as well]. All of these are aspects of the large, panoramic epic that Murakami is creating. And one we can recognize ourselves in, as well.”

It is with just such panoramic vision that Galati approaches adaptation, equally engaging his writer’s mind with his director’s eye to develop the initial script. “Because I’m a stage director and an adapter, going back to my early career, I naturally always combined what I was going to do as a director with the adaptation process. You kind of have to know what the stage is going to do in order to deliver a particular story.”

A key ingredient in Galati’s process of transforming novel to play is collaboration. The ensemble of performers, designers and technicians is integral to the development of the work. “Everyone’s collaboration is essential—we are learning how to tell the story together. Their artistry, their inspiration, is absolutely central. It’s the actors who inhabit and project the world. So nothing is more fun than a bunch of theater folks getting together to dig into a juicy script.” Actress Aiko Nakasone, who plays multiple roles in the production (and who also performed in “after the quake”) revels in the sense of adventure found in  “Kafka,” and in working with Galati, who encourages the collaboration of his ensemble in transforming the novel for the stage. “He is a great mind,” says Nakasone, “but he believes that more minds together can bring fuller production. He is so generous in that way.” Nakasone’s praise for Galati is echoed by Jon Michael Hill (a recent addition to the Steppenwolf ensemble), who plays Kafka’s alter ego, Crow: “Everyone adores Frank. He’s got this childlike appetite and sense of play. He is so enthusiastic; it is hard not to be excited, to want to do your best. To step up to that caliber of work.”

Galati and company are confident that Murakami devotees and novices alike will be able to engage in their unique vision of “Kafka on the Shore.” “Any good story makes its own rules and sticks to them. I don’t think you have to be familiar with the Impressionists School in general to appreciate a single painting. I think the story speaks for itself and has its own agenda that I think the audience can follow and understand, and really enjoy.”