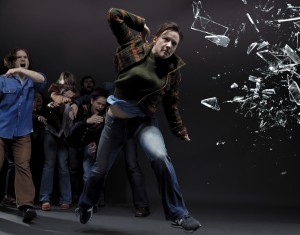 Native Chicagoan David Dorfman brings his ambivalent fan letter to the Weather Underground home this weekend in two performances at the Dance Center of Columbia College. The impassioned violence of the radical faction fascinated Dorfman as a teenager in the late sixties, and his interest was revived with the release of the 2003 documentary “The Weather Underground.” Dorfman’s theatrical, evening-length “underground” directly questions the necessity of violence—at one point the dancers are polled on what and whom they would kill for, while video projections by Jacob Pinholster ask the same of the audience—and the line between activism and terrorism. Clamorous music by Jonathan Bepler backs the company and a dozen local artists as they thrash with frustration, hurl invisible Molotov cocktails and uphold fists of defiance.

On Thursday and Sunday the company continues its examination of means justifying ends with the world premiere of “Disavowal,” inspired by the life of notorious radical abolitionist John Brown. (Sharon Hoyer)