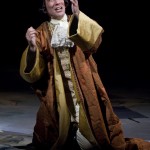 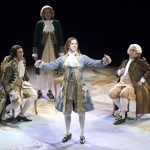 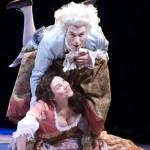 Most DVD film commentaries are snoozefests, but on the original “Amadeus” commentary that was made for the laserdisc version in the mid-1990s, a fascinating and spirited argument takes place between “Amadeus” playwright Peter Shaffer and filmmaker Milos Forman, who directed the film version. Shaffer is thinking out loud that he never should have allowed Forman to talk him into having the lead character of the play, composer Antonio Salieri, tell his story to a priest rather than directly to the audience, as he does in the play. “No, no!” Forman scolds. “Peter, in the play, the people are THERE! This is a film, a projected shadow on a wall: when an actor on a stage looks into an audience’s eyes, it is engaged and drawn in. When an actor looks directly into a camera lens, the audience is reminded it is watching a film and loses its engagement and the whole thing comes crashing down as artificial.”

That difference is one reason that for all of the magnificence of the film, it is still far more engaging to have Salieri confide to you eye to eye rather than through a projected intermediary. As if to emphasize the point, director Gary Griffin has the two sides of the audience see the other side of the audience in a ceiling mirror as Robert Sella’s Salieri compellingly unspools his woeful (and yes, mostly fictional) yarn of jealousy and murder in Chicago Shakespeare Theater’s brilliant new production. But the real surprise of this version is the character of Mozart himself, traditionally a cutout throwaway role that has often been the property of teen idols of yesteryear. Robbie Collier Sublett gives Mozart’s arrogance and vulgarity a credible context as well as shows us Mozart’s heart and soul in Act II. The contrast between a mediocre and great composer in every respect is drawn sharply and convincingly.

The one aspect that keeps this production from heading into the stratosphere is that with the exception of a single soprano who sings along with recordings karaoke-style, all of the music is canned. Finding a small, first-rate ensemble to play live Mozart in a city the size of Chicago would not be hard and would immensely enhance the proceedings. (Dennis Polkow)