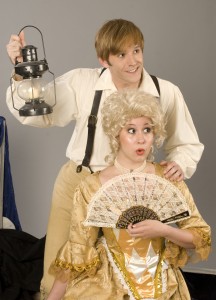 Based on the Voltaire novella that sought to lampoon eighteenth-century optimism, Leonard Bernstein’s “Candide” was written for Broadway in 1956, the show running seventy-six performances before folding, although the magnificent original cast album and the emergence of the show’s overture as a symphonic staple kept the show alive as a cult classic. Hal Prince oversaw revisions of the work in the early 1970s that replaced the original book, both a one-act Broadway version, and a two-act “opera house” version, which is the version that Lyric Opera presented under Prince’s own direction back in 1994.

Bernstein himself allowed but had nothing to do these revisions, where half of his music ended up on the cutting-room floor and the rest re-ordered. “In trying to eliminate what was admittedly a confusing book,” Bernstein told me in 1985, “the adapters also began tinkering with lyrics and where particular songs should be heard in the show, eliminating the overall musical architecture of the work, at least as I imagined it, and also tipping the work in too comedic of a direction.” The composer set out to correct this with his own “final revised version” which he completed and recorded mere months before his death in 1990, but that version has yet to be heard in Chicago.

Porchlight Musical Theatre has opted instead for the minimalist 1973 one-act revision, in many ways the least of all possible worlds of “Candide” performance possibilities. A five-piece orchestra playing this score leaves a lot to the imagination, to be sure, and reduces the fanfare opening of the familiar overture to a solo trumpet line minus the usual and much-needed supporting harmony. One staging element that Porchlight has borrowed from Prince’s own productions is the way that characters use the venue itself for their many comings and goings, which is fun, but unlike Prince’s productions, the audience members are never made part of the action. We, after all, are the real “class” for Dr. Pangloss in his various guises as he seeks to illustrate the absurdity of the optimistic philosophical dictum that the world that is, insofar as it is, is the best of all possible worlds and yet here, the characters interact only with each other and the orchestra.

At ninety minutes plus, this is a long single act and far too much of it is spent with sight gags and vaudeville-like shenanigans that at times make the music seem like a distracting, if welcome, interruption. Thankfully, those songs that are heard are mostly well sung, though needlessly and unevenly over-amplified in such a small space and in the case of the iconic “Glitter and Be Gay,” overdone. Most worthwhile about the production is Ryan Lanning’s Candide, who with his clarion tenor and boyish looks and mannerisms sterlingly pulls off what is usually a rather thankless role. And while the cast performs a rousing finale of “Make Our Garden Grow,” such seriousness and poignancy appear to arrive out of left field given the trivial tone that has largely preceded it. (Dennis Polkow)