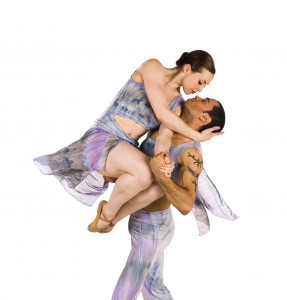 Tradition and innovation; folklore and abstraction; harmony and conflict; assimilation and fierce individuality. These are the cycles—or ciclos—revolving through the opening program of Luna Negra Dance Theater’s tenth-anniversary season. Eduardo Vilaro, the Artistic Director of Luna Negra, is continually intrigued by how displacement shapes, complicates and enriches identity, and that consciousness resonates through the three pieces in “Ciclos.” In Vilaro’s most recent creation, “Deshar Alhat,” his exploration of cultural fusion samples the music and folklore of South American Sephardic Jews.

“As someone displaced from their homeland, I’m always interested in people trying to see their identity through different lenses,” Vilaro tells me in the cozy meeting/meditation room in Luna Negra’s new River North office. “Sephardic Jews are originally from southern Spain. Right before the fifteenth century, when Isabella and Ferdinand started expelling everyone, there was a harmonious life going on for 700 years—with Moors, Muslims, Christians and Jews—a golden age of philosophy and art. I was interested in how the harmony they brought changed Latin America. There’s a lot of beauty in there—lushness, richness—to create movement and dance theater.”

A duet in “Deshar Alhat” speaks directly to interfaith harmoniousness. “When two children were born to two different mothers in the same village, even though they might be of different religions, they were breast-fed as brothers, Vilaro says. “‘Brothers of Milk.’ It has connotations of how we are all of one earth, all brothers of the earth.” Yet it becomes clear that, again, the real interest for Vilaro lies in the inherent contradiction, the breaking away, the unending cycles of conflict.

The palate of “Deshar Alhat” is indeed lush and sensuous and distinctly Latino, yet there is a melancholy to the passionate physicality of the choreography, heightened by raw, earthy vocal performances by Stefani Valadez. Valadez has personal roots in Sephardic Judaism, which strongly resonates through her compositions, but her music—like the repertory of Luna Negra—does not strictly adhere to any one traditional form. “She works with Middle Eastern music,” Vilaro says of Valadez, “but fuses sounds: Hebrew texts to Caribbean percussiveness. And that’s exactly what’s going on right now.”

Also new to the Luna Negra repertory is a revival of “There is a Time,” a piece based off the famous passage in Ecclesiastes, by celebrated choreographer Jose Limon. Limon was an influential figure in modern dance, but not particularly renowned for allowing his Mexican heritage to influence his choreography. However, as a fellow classically trained Latino dancer who immigrated to the United States at a young age, Vilaro felt a kinship with Limon from an early age. Years later he detected elements of Latino culture in “There is a Time.”

“Growing up, I never found his work to be specifically ethnically focused until I saw ‘There is a Time.’ I just had to grow up; at the time I was just at the barre, trying to get into a company. But I saw the piece and thought, ‘Now wait…that’s patterning from Mexican folk movements, and that’s Spanish arms.’ I thought this would be a wonderful piece because not only does he incorporate a lot of Spanish and Mexican forms,” Vilaro pauses and smiles. “Though some would argue with me about that…but I really want to have that argument—but he also includes the bigger picture, using the piece from Ecclesiastes with music from this Italian fellow with a technique by Doris Humphrey. Again, I think it’s what Luna Negra is all about.”

Rounding out the program is “AviMar,” a new work by emerging choreographer Francisco Avina in collaboration with Stephanie Martinez. Avina’s fierce choreography is a non-narrative, abstract, highly internalized study of the female psyche, set to a string arrangement of heavy-metal tunes. “AviMar” brings the program full circle: athletic externality probing the internal, new fusions responding to and rebelling against old ones. And, in the Luna Negra tradition, a continual reworking of cultural expectations. “Some people ask me, ‘Why would he use heavy metal?’” Vilaro says of Avina’s musical choice. “I say, ‘We’re Latinos living in the U.S. Some of us listen to Megadeth.”