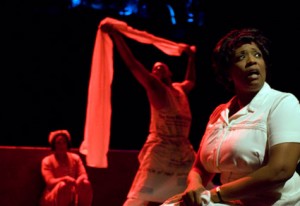 Beginning on the day of John F. Kennedy’s assassination, “Caroline, or Change” is a perceptive but gentle study of a southern Jewish family and their African-American maid in the early 1960s. Tony Kushner’s show had its first incarnation as an opera before becoming a musical, a fact immediately evident in the way that the text and music seamlessly narrate the series of events that follow when Caroline is told she can keep the change that Noah, the child of her employers, leaves in his pockets. This material could all too easily have become trite in other hands, but Kushner’s writing and Jeanine Tesori’s complex score combine the pathetic and the irreverent marvelously. The Court’s decision to use children and young people in four of the extremely demanding parts is daring, and they are as remarkably successful as the rest of the cast, with Melaine Brezill keeping up with E. Faye Butler’s impeccable “Caroline” as her daughter Emmie, who in the most memorable scene debates with the Jewish grandfather about the uses of nonviolent resistance. (Monica Westin)