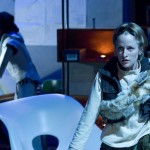 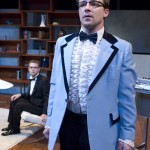 Who hasn’t fantasized about time travel? Reliving your happiest moments, correcting your most regretted mistakes, maybe encountering a few aliens on the way. The House Theatre has decided to trek back to 2005 and revive their production of “Dave DaVinci Saves the Universe”—having transported to their new home at the Chopin Theatre. I did not see the show’s first incarnation, so I can’t say this revival is, as the press release claims, sharper, tighter or more heartfelt than before. I can, however, wholeheartedly say that the current production is visually sleek, finely tuned and incredibly touching. The story of a Dave, the mathematician (played by both Stephen Taylor and Dennis Watkins) and his musician wife Nora (the always wonderful Stacy Stoltz ) who, devastated by the suicide of their prodigal daughter, science-fiction writer Purdi DaVinci (Paige Hoffman), lay all their hopes and faith on Dave’s homemade (from a cell phone) time machine as the instrument by which they can save Purdi’s life. The past, present and future plays out alongside the fictional world of Purdi’s stories, inhabited by a young, fiery space captain named Cass Meridian (Hoffman again) and her trusty (and phenomenally costumed) sidekicks, a robot named T.H. (Joshua Holden) and the large, looming space bear Arcturus (Carolyn Defrin, who also takes on the role of Nora from the past). Despite some fuzzy logic as the time travel begins to get frantic, the entire production runs like a well oiled-machine under the direction of Nathan Allen, who shares playwriting credits with Chris Matthews and Jake Minton. (Valerie Jean Johnson)