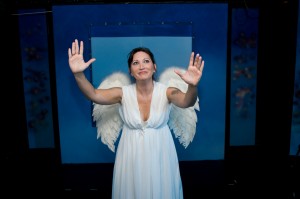 Often, one of the biggest inspirations for a person to become an actor is the desire to inhabit a world other than their own, the challenge of “becoming” another human being. But for actress Mierka Girten, company member of A Red Orchid Theatre and writer/performer of the company’s season opener “With or Without Wings,” starring as herself in her own life story may be the richest, most rewarding role of her career.

Girten’s one-woman show, which first debuted in 2001, chronicles her devastating 1992 diagnosis and subsequent battle with Multiple Sclerosis with incredible honesty and surprising humor. Girten takes the audience on a ninety-minute journey from childhood to present day,  playing not only herself, but a whole cast of characters from friends and family to healers and not-quite-healers.

“[The play] started as journal entries mostly,” says Girten. “Friends [who] found my story interesting and funny…encouraged me to keep writing.” Girten crafted the journal entries into a play, which she shared with her friend Michael Thomas, who challenged her to dig deeper, and helped her to adapt the play into what is now an extremely candid personal portrait of the triumphs and defeats of living with this complex and debilitating illness.

Girten (who is now in remission) was inspired during the first run of “With or Without Wings” to create the Mookie Jam Foundation, a non-profit organization dedicated to benefiting artists with MS. And both Girten and director Larry Grimm, a fellow company member at A Red Orchid, agree that this play is as much about educating people and raising awareness about MS as it is about putting on a great show, full of energy and humor.  “I think that everyone has their own story to tell,” says Girten, “and I think telling our stories can bring people together. We should be able to laugh [at our challenges]. If I hadn’t been able to laugh, I don’t think I’d have gotten better.” (Valerie Jean Johnson)