by Monica Westin
September 29, 2008Filed under: 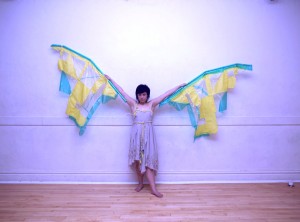 Angeline Gragasin is the creator of “Angelus Novus, ” a new physical theater piece by National Headquarters investigating American archetypes, consumer culture, and history that’s also a traveling show visiting under-served neighborhoods in Chicago. Its collaborative artists, trained in performance traditions from Commedia dell’Arte to miming, use circus and spectacle, clown and dance, original live and electronic music, and large-object acrobatics to depict power struggle, truth-telling and social activism in an ailing urban community. We discussed the work with  Gragasin just a few days before its debut.


“Angelus Novus” combines such diverse theatrical forms as pageantry and historical reenactments. Could you start by describing it as a performance? What is the relationship between the show, originally inspired by the Klee painting “Angelus Novus,” and its namesake?

First of all, “Angelus Novus” is a theater piece—it is a play—in that there is text. The story was commissioned for the piece, with the original inspiration being the Klee painting “Angelus Novus” and Walter Benjamin’s concept of the angel of history. The pageantry and historical reenactments fit the material, and in fact the different theatrical elements came together quite naturally. It’s not an adaptation of the painting, or some kind of attempt to bring a painting to life. Instead we’re trying to create contemporary scenario and archetypes that evoke these images and concepts. To describe the play in a sentence: the angel of history lands in a fictional, corrupt small town in Illinois in 2008. If anything, I would describe “Angelus Novus” as futuristic.

The process for the show was very collaborative between you, the writer, and the input and improvisations of actors, over the course of the year. How did that work?

I knew as early as May of 2007 that I was going to make a piece through a residency I was awarded just out of college, and I didn’t want to make a halfhearted piece—I wanted to use it as an opportunity to make a full production, an independent production. So first of all I had to consider how to finance it—I was thinking, how can I spin the project so that it can allow me to get this grant, for example? Of course finance was only one factor, but the project kept expanding once I realized the more opportunity to create and involve more people. The writer, director, composer and I spent all this time reading things and looking at images, sending YouTube videos back and forth, and in February the scenic and costume designer got involved. A lot of this was remote collaboration, and I think that issues of distance, proximity and internet communication are very much reflected in both the process and production itself—both fragmented but related experiences. The actors were the last to come into play, and when they started all I knew was which archetypes I wanted to work with—I’m very fascinated with tyrannical dictators, for example, and I wanted an angel of history, we knew we wanted a chorus, and it’s just kept evolving.

Will it keep developing through production?

It certainly won’t be a different show every night, but it will be dynamic because it’s so action-based. This is why we can call it physical theater—it’s not just that we’re training physically, although we’re doing that, too, working very very hard… Here’s an example: when we’re working with cues, the music isn’t going off of verbal cue—it’s going off of action. And timing of action could go a little differently every night. The action cues are all interrelated. One person does one action, which cues another action…

—and that will change every night. It’s not choreography per se, that’s important to know. Some scenes have no text at all, just movement… The text of the play is very much is heightened but not esoteric—it’s meant to be understood.

The show contains influences from Walter Benjamin to television commercials. Tell me more about high and low culture in this performance.

Something that makes these juxtapositions different is that we’re doing it in a way that is not meant to give insight, it’s not about representation and meaning-making—it’s that we put these elements of say, Paul Bunyan and Sacagawea together, and that action is the kind of commercial action you see everyday, on television or on the internet. The experience of having all of these images, simultaneously, makes it difficult to maintain clarity. I almost would have liked to have gone further, and done more with commercials, internet, new media…

When you started your research for this project, what were you hoping to address? Did you have a driving message, or hypothesis, about the performance?

Yes, and it didn’t have to do so much with the content of the play as the process. I want to address the theater-making process, the performance process. I want to show that it can be done independently, that it can be done with very little money. Most resources for “Angelus Novus” are donations, or borrowed… I wanted to show that it can be original, entirely original. I wrote a really angry essay once—maybe you shouldn’t reference this—about how in Chicago people think that contemporary adaptations of classic plays count as original. I want to tell people: make something from scratch. That’s very important.

You’ve said before that you don’t believe in side projects.

That’s right. Production-wise, everyone who was involved are—I would venture to say—precocious masters of our craft. We’re not dilettantes—we’re not dabbling in forms. We’re highly trained—in clowning, miming, acting, acrobatics, Commedia dell’Arte, and so forth—and we can and will be more trained… But its not like we’re doing Suzuki; I’m not training people in Commedia dell’Arte. We use the training in order to find our own style and our own process and methods. I have too much respect for the forms we’re borrowing from to bastardize them… that sort of thing really offends me. If people understand that everyone off the street can’t just start performing Shakespeare, why isn’t there that respect for other kinds of performances? To make any kind of artistic statement takes a lot of consideration.

It was fun to see an excerpt from this show at Links Hall before it premiered at AV-aerie.