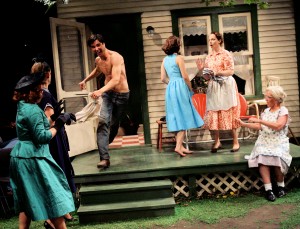 William Inge’s 1953 Pulitzer Prize-winning play, his follow-up to “Come Back, Little Sheba,” was a groundbreaking, cutting-edge work portraying the dark desperation of 1950s Midwest Americana that, in the right hands, still has the power to pack quite a wallop. Director David Cromer does not ignore the fact that this is the Eisenhower era, but the work is staged to remind us that the time and place could well be anytown, anytime, right down to a reconfigured Writers’ Theatre space where the audience is engulfed by realistic grass and dirt and are made to be porch ornaments between two houses in a Kansas neighborhood over a Labor Day weekend.

Kids are playing, arguing, making fun of one another, in short doing what kids usually do, until a hunky, charismatic guy (Boyd Harris) comes to town who with his charm and good looks manages to set the entire town on its ear. Old ladies start to feel young again as he works shirtless, kids want to play with him, old friends want to offer him jobs, middle-aged guys want to drink with him, middle-aged women are reminded of shattered male fantasies and girls and teenagers fall in love with him.

The guy awakens repressions in a community where repression is an art form and whether or not what transpires is of his own making or has been thrust upon him by the community is one of the fascinating issues of the play. Is this a drifting loser who is willfully seducing those around him to get by, or does judging a book by its cover manage to bring out people’s basest instincts? It is a sobering, sometimes terrifying reminder of how much all of us, whether we like it or not or believe it or not, make judgments based on appearances and how devastating such judgments can be for all concerned.

Although Harris steals the show by making audience members start to have the same varied reactions to him that the townspeople do, the entire cast is first-rate down to the smallest roles and interact as a first-rate ensemble with as much “familiarity breeds contempt” as so often occurs in real communities. This is one picnic that you come away with plenty of food for thought. (Dennis Polkow)