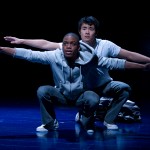 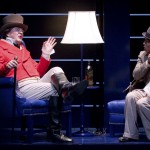 A visually stunning exploration of archetypal journeys. “Kafka on the Shore” follows an old man, damaged as a child in a mysterious accident, who searches blindly but faithfully for a cat and a mysterious stone; and a teenage runaway trying simultaneously to both determine and escape from his place in the world. The show incorporates elements of murder mystery, psychoanalytic theory and magical realism in its explicit mission to explore the boundary between the real world and the unconscious. Ultimately, both the greatest strength and weakness of the story is that none of the riddles are ever solved, and audiences will either be frustrated at all the strands that are left unraveled or else delighted at the open-ended conclusion. Instead, the play, beautifully adapted by Frank Galati from the novel by Haruki Murakami, acts as a kind of kaleidoscope of images and characters who morph, combine, and fall into patters of perfect dream logic. Juxtapositions of pop culture and bizarre sexual motifs provide comic relief and lightness when “Kafka” threatens to drown in its own weight. (Monica Westin)

Click here to read a feature about this production.