by Dennis Polkow
September 29, 2008Filed under: 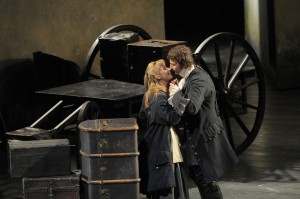 In recent seasons, the Lyric Opera modus operandi has been to take an operatic warhorse, usually Italian, and open and close the season with it but with different and often mediocre casts to trade primarily on the marquee value of the work itself. Kudos to Lyric for setting aside that tired formula and for opening the 2008-9 season with a spectacular production of Masenet’s “Manon” that forms the basis of one of the most memorable Lyric openings in years.

Other than “Carmen” and “Faust,” French opera is rare at Lyric and when it is presented, key segments and ballets are often cut and there is little that is, well, French. How luxurious then, to bring in French soprano Natalie Dessay to sing her signature role at the vocal height of her career, giving us the “Manon” of a lifetime complete with all of the grand French trimmings. Unlike Renée Fleming, who sang a single act of this role to open the Metropolitan Opera season last week and who exudes confidence and glamour at every turn, Dessay not only has the advantage of having French as her native language and a truly French color to her voice, but she is able to make us believe in the opera’s opening act that she is indeed a naïve, 16-year old girl who is leaving home for the first time. We see the wonder of the world through her eyes, and even Dessay’s vocal colorizations match what her character is feeling. As she falls in love and becomes more world weary, Dessay is able to act and sing that difference. And the coloratura ornaments and trills are exquisite at every turn.

This could well have been Dessay’s show exclusively and no one would complain, but German tenor Jonas Kaufmann makes a tender partner for her, matching her delicacy and fragility as an actor as well as her vocal shadings. Seldom has music and drama been both so well served. How rare and wonderful to experience two performers who appear to fall in love and be able to sustain that illusion all while singing their hearts out. No less significant is the work of French conductor Emmanuel Villaume, who is able to make the Lyric Opera Orchestra play with the delicacy, feeling and timbre of a French orchestra, but with greater precision and accuracy. Miss this extraordinary production at your own peril. (Dennis Polkow)