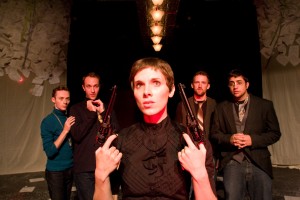 Never has the description of a play begun so reasonably and descended so thoroughly into insanity. Case in point is the following synopsis for playwright Jeff Whitty’s “The Further Adventures of Hedda Gabler,” at the Viaduct and kicking off Dog & Pony’s fifth-anniversary season. Penned not by some overzealous publicist but by the conservative Dramatists Play Service, who licenses the rights to the show, it goes a little something like this: “Beginning immediately after Henrik Ibsen’s classic ends, THE FURTHER ADVENTURES OF HEDDA GABLER finds Hedda mired in an alternative hell: a place where death is only possible when a fictional character is forgotten by the real-life public. So what is one of drama’s most famous suicides to do? After taking advice from helpful neighbor Medea, Hedda and her servant, Mammy, set out on a perilous quest to return to the imaginative furnace of their creation.” Now this could be fantastic or horrible, but either way I want in! But wait, there’s more: “Along the way, they meet characters from science fiction, Black feminist theater, TV cop shows, Biblical dramas, as well as a couple of wisecracking, self-hating gay characters from the 1960s. Once Hedda and Mammy arrive at their fiery destination, they face a heartbreaking truth about themselves, their creators, and the forces that make them eternal.” But does co-directors Devon de Mayo and Daniel Stermer’s production deliver? Like gangbusters! I can’t recall the last time I laughed so hard in the theater as I did on opening night, which found me practically in tears during my favorite moment when the black Mammy (an unforgettable comedic turn by Jeannette Blackwell) finds herself in a pop-cultural wasteland shooing away “Star Wars”’ Jar Jar Binks. Or maybe it was at any moment featuring the play’s two mincing, martini-sipping and swishy homosexuals, Patrick (Matthew Sherback) and Steven (Nick Leininger), lovable and sympathetic characters straight out of playwright Matt Crawley’s “The Boys in the Band,” where they weren’t that easily lovable and sympathetic. And that’s one of the great things about “The Further Adventures of Hedda Gabler,” it not only celebrates pop-cultural, literary and historic stereotypes, it also makes its point for their place and importance in history. It’s a play that invites smart people to have stupid fun, and one whose outré sensibilities would be worthy of the late Charles Ludlam and his Ridiculous Theatrical Company.  (Fabrizio O. Almeida)