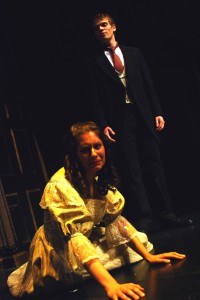 Although “The Picture of Dorian Gray” was playwright Oscar Wilde’s only novel, the piece has so fascinated that adaptations of it are staged almost as routinely as his iconic plays. Who can resist the notion of a young man able to keep a portrait that ages up in the attic while he stays youthful and vigorous over a lifetime of debauchery?

Lifeline Theatre ensemble member Robert Kauzlaric’s two-hour version goes for the throat, often literally, in plummeting the dark depths and Gothic horror of the work, perfect for the Halloween season. Yes, there are introspective issues at stake in the work that are glossed over and true, many of us would consider Wilde’s grotesque details as metaphorical, but metaphor doesn’t stage well.

The picture itself is often done up as a boring portrait that rarely reflects Wilde’s own description of its beauty, so it is refreshing to see not only how much that the picture looks like an idealized version of the lead character, but that it is done up in a neo-Impressionistic style reflective of its era. And though the transformations themselves happen through sound effects while the painting is usually not visible, the climax and final portrait will not disappoint.

Nick Vidal makes a splendid Dorian, a brainless, beautiful creature who looks as if he was made of “ivory and rose leaves,” as Wilde puts it, complete with the “golden curls.” Vidal makes Dorian’s transformations all the more believable by keeping him emotionless throughout: at first, a naïve boy fascinated in the theories of his elders, but as time goes on, a manipulating narcissist whose ethos remains an inability to think of anyone but himself and his own pleasure, i.e., the older we get, what often seems to characterize youth itself. (Dennis Polkow)