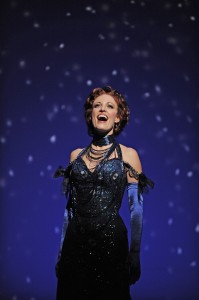 Seeing director Tommy Tune sign an autograph in the Goodman lobby before the world premiere of “Turn of the Century” was a tangible indication of the star wattage, of the stakes involved in what is likely the fall season’s most-anticipated theatrical opening. With the nine-time Tony winner helming the debut of the new musical from “Jersey Boys” creators Marshall Brickman and Rick Elice, and featuring movie star Jeff Daniels and Broadway star Rachel York playing the romantic leads, this is a production clearly pointed toward the bright lights of Broadway.

Dixie and Billy are success-deprived musicians who find themselves together on the eve of the new millennium. (Hearing “1999” performed as a piano “standard” affirms Prince’s decision to retire the song from his repertoire.) They’re soon magically transported back a hundred years to the dawn of the twentieth century, where Billy realizes they can release the hits of the upcoming era as their own creations, and convinces Dixie to play along. Before long, they are the superstars they’ve always dreamed of being, albeit not on terms ever imagined. The conceit allows for a songbook-of-the-century musical mash-up, from Irving Berlin and George Gershwin to Paul Anka and Paul Simon, a process that subtly evokes its own commentary about the relative paucity of contemporary culture, perhaps exemplified in Dixie’s aspiration to be like “Celine Dion!” The result is a crowd-pleasing period musical in the tradition of, say, “Thoroughly Modern Millie” with some thoroughly modern juxtapositions, like a comical take on Helen Reddy’s “I Am Woman” sung by Ziegfeld Girls. Walt Spangler’s set soars with gorgeous simplicity: an oval portal envelopes the stage, with an encircling LED crawl that provides setting details and some humorous commentary; inside its borders a multipurpose backdrop curves like the sky itself, sometimes turning the set into a glorious epic snow globe. In the Goodman’s relatively intimate space, the overall effect is magical; this is the Broadway musical of the imagination, one that the reality of the much larger theaters normally housing big musicals can’t imitate.

Under Tune’s direction, the musical is a loving homage to the era it plunders; the costume and choreography is “Top Hat” come to life (without the dancing of Fred Astaire, or much dancing at all, for that matter). The radiant Rachel York, with her big voice and just the right vulnerability, is perfection as Dixie. Jeff Daniels, as Billy, is not. In real life, he’s a Michigan-based movie star who does admirable things for Midwest theater and even croons a bit as a singer-songwriter, but his voice is adequate at best. Of course, his role doesn’t really require the big pipes since he plays the piano man, but it does call for lady-killer charisma and that’s not him. He’s just too affable, in spite of the douche-bags he’s played in the movies at times. But he’s good enough: with the sparkling York at his side and a crackerjack ensemble around him, anyone with a soft spot for the nostalgia of Tin Pan Alley and old Broadway will swoon.

What elevates “Turn of the Century” above mere pleasantly nostalgic musical theater is the sort of Einsteinian cultural paradox it conjures. Before long, a 12-year-old Irving Berlin (played with beyond-his-years verve by Jonah Rawitz in a very demanding role) enters the lives of Billy and Dixie, who’ve been merrily making hay “writing” the songs Berlin’s destined to write. What will Berlin and his fellow songwriting greats do with their lives if all their songs are taken? The musical asks the question but then brushes it aside in order to rush us toward the obligatory happy ending.

It’s a sly comment, nonetheless, positing that our culture is milking its past dry. Are Brickman and Elice offering penance for their own transgressions, their “plundering” the songs of others for profit here and in “Jersey Boys”? Or are they simply asking a big question of our time: if every big hit is either a revival or a repurposing of a movie (hello, “Dirty Dancing” and ‘The Producers”), what kind of future are we leaving for the culture? (Brian Hieggelke)