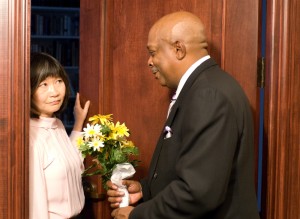 “Yohen” is the exotic-sounding title of playwright Philip Kan Gotanda’s disappointingly banal new relationship drama at Silk Road Theatre Project. The word itself describes a rare occurrence in Japanese pottery-making whereby the finished product—depending on which way you look at it—is either flawed and irreparably damaged, or beautiful and worth saving. It’s a metaphor, of course, for how Japanese Sumi (Cheryl Hamada) and African-American James (Ernest Perry, Jr.) have come to view the state of their marriage after thirty-seven years. A couple who first met and fell in love in post-World War II Japan, Sumi and James, an ex-GI, now find themselves retired and living comfortably in a suburb of Los Angeles circa 1986. Working against stereotype, the character of Sumi, we soon learn, is anything but the obsequious Asian wife. In fact, Gotanda sprinkles details such as the fact that she was already married once, was anything but domestic (wouldn’t clean, couldn’t cook) and was unable to have children. When a mid-life crisis sparks a spiritual reawakening inside Sumi, it sends her back to school (to obtain a fine-arts degree in Japanese ceramics) and the unambitious, couch potato and beer-guzzling James packing. Now as the late film critic Pauline Kael once astutely observed, there’s something annoying about the disgruntled wife who decides to “take classes,” maybe because it infers that the husband is “in no need for reeducation.” But even this personal cavil aside, Sumi’s character loses all credibility by the end, when she ends up a weepy mess begging her husband to return. And it’s difficult to believe that it would take thirty-seven years of marriage and a temporary separation to spark the tough conversations surrounding mixed-race marriage and sterility that Sumi and James seem to be having here for the first time. There are a few moments in the drama, and actors Hamada and Perry are far too good and likable not to make some of their lackluster lines work, but the playwright’s penchant for spoken lyricism, displayed in his far superior “Ballad of Yachiyo,” is missing here, as is an insightful and thought-provoking examination of assimilation, race and feminism, as in “The Wind Cries Mary,” Gotanda’s loose take on Ibsen’s “Hedda Gabler.” Steve Scott directs with his customary attention to character nuance and detail, but hasn’t nailed the rhythm of the play’s laborious first half. Ultimately, there’s nothing bad about “Yohen,” there’s just nothing special about it. Or nothing that Strindberg, or for that matter Bergman, didn’t already do. Indeed, “Yohen” here might as well be Japanese for “Scenes from an Asian-African-American Marriage.” (Fabrizio O. Almeida)