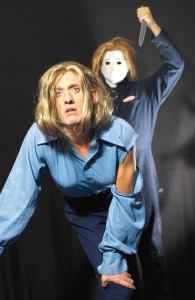 If only Broadway jukebox musicals were half this twisted. A cult hit from last year, “Carpenters Halloween” marries director John Carpenter’s 1978 slasher flick “Halloween” to the music of The Carpenters, replete with all the ooey goodness you’d expect from “We’ve Only Just Begun” and “Rainy Days and Mondays.” It’s a tremendous idea, and talk about your incongruities.

The creators Scott Bradley and Jonny Stax—better known as The Scooty and JoJo Show—have a serious boner for pop culture and movies, and the company has concocted some majorly funny stuff in the past year, including a transgendered “Tron” spoof called “Tran,” and a John Hughes-Molly Ringwald confection that all but slayed me. I love the aesthetic they’ve landed on, with cardboard cutout props (like something ripped from a comic book, literally) and Muppety puppets filling out some of the roles.

Can’t say things work quite as well in “Carpenters Halloween,” which isn’t fully realized conceptually. (Bradley, who stars in the Jamie Lee Curtis role, also directs.) The awkward stage dimensions at Mary’s Attic are part of the problem—any show with numerous scene changes is going to look clunky in this space. And some of it could my own deficiencies—I can’t quote “Halloween” the way I can “Sixteen Candles.” I will say this, Bill Morey’s costumes (including the goofiest pair of bell-bottom jeans ever) are bang-on-the-money. These kinds of details matter, and Scooty and JoJo get it.

The best thing going on is Bradley’s performance, and that’s been the case with all of Scooty & JoJo’s shows so far. Bradley is an expert mimic—he’s got the Jamie Lee Curtis hair flip and facial expressions down cold. Someone get this guy some Activia. (Nina Metz)