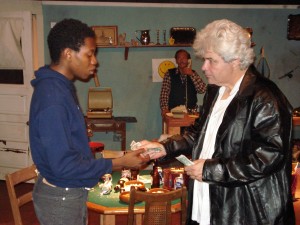 A production to root for, ambitious and timely—David Mamet’s play about three codependent would-be criminals in the mid-seventies era of recession, growing economic disparity and gas shortages has echoes of all kinds to our world now. “Knowing what the fuck you’re talking about, ” one character mumbles to another as they plan their sabotage on a rich coin collector living around the corner, “it’s rare… it’s so rare.” And love him or hate him, Mamet creates characters and plots with a master’s touch. The writing is so strong that it’s easy to ignore the uneven acting—Will Cummings III as Donny, the moral center of the play, provides the only really admirable performance. Music from the era and the thoughtful set, a resale shop complete with trash and treasure of all kinds, helps augment the mood of entrapment in a desperate time, but “American Buffalo” remains a true vintage that transcends this earnest but at times watery production. (Monica Westin)