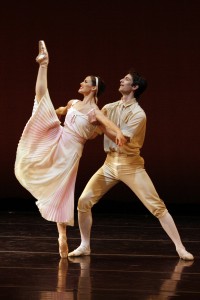 This time last year, Ashley Wheater took the helm of the Joffrey Ballet, filling the formidable shoes of Gerald Arpino, who co-founded the company alongside Robert Joffrey more than fifty years ago. This, the first season under Mr. Wheater’s direction, is both a Romantic tribute to the masters who have directly influenced the Joffrey and a look into the future of Chicago’s premiere classical ballet company.

During a particularly hectic week with a ballet master sick and twelve days till opening night, Wheater took time during his lunch break to chat with me about the upcoming fall program at the Auditorium Theatre—as well as his personal experience as the third artistic director of the Joffrey Ballet.

“The company has worked so hard,” Wheater says between bites. “I think they’ve really improved; there’s a different quality to the work. And that was my goal, to show them another way of doing things. I feel the company is deepening and expanding in its talent and performance ability.”

Part of the growth can be attributed to fresh material. The fall program features the world premiere of “Age of Innocence—a nostalgic work by rising star Edwaard Liang, former soloist with the New York City Ballet. Inspired by the novels of Jane Austen and set to music by Philip Glass and Thomas Newman, Liang’s piece investigates the sensations and emotions roused by an empty ballroom.

“Ed is a very talented young choreographer,” Wheater says. “I wanted to bring him here because there hasn’t been a lot of new work choreographed on the company. I feel the choreographic process for both dancer and choreographer is so important because it deepens the understanding of the company. They get to explore the quality of their movement.”

Also new to the company is renowned master Jerome Robbins’ classical piece “In the Night.” Set to the Chopin Nocturnes, the piece is a series of pas de deux that explore three permutations of love and is, in the words of Wheater, one of Robbins’ most sublime pieces of classical ballet. The Joffrey is the first company granted a new production of the work.

The program opens with a tribute to the founder of the company: a revival of “Postcards” by Robert Joffrey—the first performance of the piece in twenty years. It is a fittingly romantic work, set to the music of Erik Satie and evoking images of Paris in the early 1900s. While there is a sweet nostalgia to the fall program, the overall theme of the year is forward momentum; the 08-09 season is entitled “Time to Move!”

“This is such a new beginning for this company,” Wheater tells me. “There’s a lot of excitement, a lot of energy, a lot of opportunity. We’ve moved into a new building,” referring to the new Joffrey Tower on Randolph. “We have a fantastic team in place. Christopher Conway took over as executive director last year and we make a great team; he’s done so much to move the company forward in an administrative position.”

Ashley Wheater has deep roots with the Joffrey—he danced with the company years ago, when he moved United States from Australia. Wheater has spent the last nineteen years with the celebrated San Francisco Ballet. Of his return to the Joffrey and his relationship with American ballet, Wheater says, “Chicago is, to me, a great, great city. To be a part of the cultural scene in Chicago, I feel a huge responsibility.”

When I ask what he’s learned from his first year working with the company, Wheater says without pause, “A lot. I had known Jerry Arpino because he brought me to America from Australia. But what I think is so special about Chicago and the people of Chicago—and the executive board, and the women’s board—there are so many amazing people in this city who love the Joffrey. So many people who’ve committed so much time and talent and energy. And all the dancers who’ve been in this company and kept it going and kept giving it the quality of dancing that people have come to expect. I realize how much everyone has put in and I’m really grateful.

It’s a really stunning program,” he adds. “I encourage anyone who is curious about dance and ballet to come out and have a look.”