by Monica Westin
October 6, 2008Filed under: 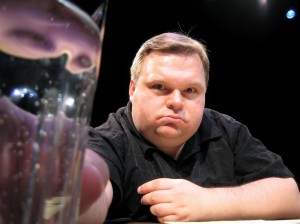 Most famous for harshly accusing regional theater of betraying its local actors (in his typically blunt monologue “How Theater Failed America”), Mike Daisey is one of the most visible monologuists around—and one of the most provocative. The New York Times called him “one of the finest solo performers of his generation, ” a sweet if vague tribute that speaks both to his appeal with intelligentsia and to the difficulty of defining exactly what his focus is. (Other monologues have covered monopoly, the cold war and great men of genius.)

In addition to the many monologues he’s performed at rep theaters across the country, Daisey is also a frequent radio commentator and writes for a gamut of magazines from Wired to Vanity Fair. And he’s working on his second book, which covers, among other topics, the lives of Bertolt Brecht and L. Ron Hubbard. So is Daisey a true Renaissance man or simply another self-described maverick and gadfly on the necks of greedy theater managers everywhere? At this point it’s probably only fair to bring up how funny almost everyone finds him. Sarah Wambold of the MCA, where Daisey is bringing his latest monologue this weekend, describes him as a “cross between David Sedaris and Lewis Black.” It seems to be a consistent description given Daisey’s propensity to take on absurdity as a general theme.

This time, taking on the rhetoric of paranoia and politics, he’ll be waxing on the Department of Homeland Security through a monologue called, appropriately, “If You See Something Say Something.” Where the material might seem a little 2005, the MCA is counting on Daisey’s masterful storytelling and extemporaneous performance style (unique for a monologuist of his stature) to keep the unscripted, unrehearsed narrative fresh. Perhaps the most timely aspect of the show will be the kind of authenticity that derives from such an immediate performance—a kind of “reality monologue” in real time. It’s also rare to see a performer who’s married to his director, as Daisey is (to Jean-Michele Gregory). I’m personally sold by the promise of “for mature audiences only.” (Monica Westin)