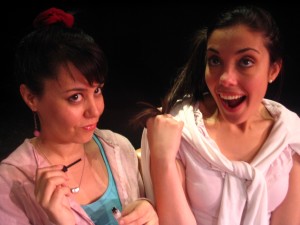 I am in awe of writer Tanya Saracho’s new play at the 16th Street Theater in Berwyn, so much so that I hope she’ll take it as a rare compliment when I say that its potent mix of laughter and lyricism compels me to dub the Mexican-born, American-bred playwright the Chicana Chekhov. “Kita y Fernanda” is the play, and its rich imagining of the complex lives of two girls growing up in the same household—one (Fernanda) the privileged daughter of a wealthy Mexican family living in Texas and the other (Kita) the daughter of their undocumented Mexican maid—is beautifully rendered through monologue and memory, the entire ninety-minute play dramatizing one chance encounter between the two women years after their last interaction. A flood of fragmented memories follows—casual conversation, inconsequential events like a play dates with Barbie dolls—and it charts the girls’ evolving relationship to and feelings for one another, as well as their equally complicated relationships to their mothers Silvia, Fernanda’s emotionally fragile mama, and Concha, Kita’s well-meaning but neglectful mother. Anyone familiar with Saracho’s work for Teatro Luna (where the majority of her original writing has been seen, although that is ready to change this fall thanks to some high-profile upcoming projects) already knows she is capable of capturing the essence of human emotions through her lyrical and evocative dialogue, but even I was unprepared for the degree to which her writing here has evolved, characterized by a grace and suppleness that has you laughing out loud and your spirit soaring one moment, and the next searing with sympathy as you the feel the pervasive presence of loss and regret. It’s sublime stuff, especially as performed by the talented quartet of Latinas Charin Alvarez, Belinda Cervantes, Stephanie Diaz and Suzette Mayobre and as played out in the hyper-intimacy of the 16th Street Theater. It’s worth mentioning that large chunks of the play are performed in Spanish, and although I am fluent in both languages, my English-speaking companion was not. Nonetheless, she was moved to a similar experience. Ann Filmer’s flawless direction is strong yet subtle, focusing our attention on the priceless looks characters give one another, in addition to perfectly modulating those subtle shifts in rhythm that Saracho’s writing demands. The play says a lot about race and class, childhood and loss of innocence, but word-for-word showcases a writer at the top of her game. (Fabrizio O. Almeida)