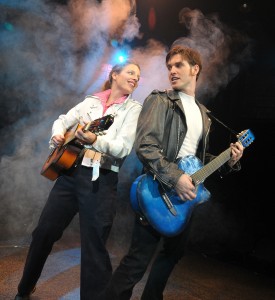 Let’s face it: as long as there is a popular musical song catalog to be exploited for the stage, and someone to churn out a serviceable storyline on which to hang them, the “greatest hits of insert-artist-name-here” musical will exist. What distinguishes Marriott Theatre’s “All Shook Up,” easily one of the best jukebox/compilation musicals since “Mamma Mia!” is the work of book writer Joe DiPietro. Just as playwright Catherine Johnson did with the hits of ABBA, DiPietro has taken twenty-four lyrically unrelated songs (in this case those recorded and made popular by Elvis Presley) and effortlessly glided them into an entertaining storyline that not only squeezes from the Presley numbers a satisfying dose of feel-good nostalgia, but also (and perhaps more impressively given the typical low dramaturgical standards expected of the jukebox musical) achieves narrative continuity and character development through the music and lyrics.

As the playwright showed with “I Love You, You’re Perfect, Now Change”—his silly little musical revue from the 1990s that managed to tap into the “Seinfeld” pop-cultural zeitgeist and run Off-Broadway for years—DiPietro possesses a clever and corny sensibility when it comes to adult relationships, albeit heterosexual ones, and these qualities serve him well in crafting the story of a “Roustabout” rock ‘n’ roll drifter who arrives to shake things up in a “small you-never-heard-of-it Midwest town” in 1955. But “All Shook Up’s” script is also loosely based on Shakespeare’s “Twelfth Night,” and this requires a delicious irony in its handling of the Bard’s tolerant and at times transgressive take on sexual ambivalence, same-sex permutations and rigid-class structures. DiPietro has it, and his use of “Can’t Help Falling in Love” as the musical’s 11 o’clock number is a beautifully contrived burst of humorous and lyrical musical expression.

Of course, these observations into the heart and soul of the piece would have been impossible without a production that was equally on par, and I don’t have enough room to praise everyone that deserves it. Nonetheless, highlights include director/choreographer Marc Robin’s exuberant and bouncy choreography—I loved the nod to Bob Fosse’s famous popcorn jump—which captures a sense of youthful spontaneity I last saw in Wayne Cilento’s work in “The Who’s Tommy.”

Jessie Mueller, last seen as Carrie Pipperidge in Court’s “Carousel,” brings her proven tomboyish charm and a warm voice to the female lead role, and Tyler Hanes’s graceful athleticism shines through Robin’s moves. Add an ensemble of Marriott vets including Ross Lehman, Paula Scrofano and Matt Raftery and what is left to say except well, Mamma Mia!, how could I resist you? (Fabrizio O. Almeida)