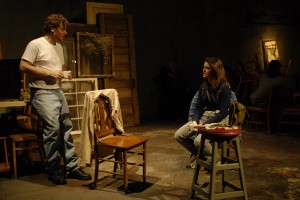 British playwright Simon Stephens’ “On the Shore of the Wide World”, the first offering from Griffin Theatre’s eclectic twentieth-anniversary season, spends two-and-a-half hours exploring the everyday minutia (mostly discoursed, rarely dramatized) of three generations of a working-class English family. There’s the possibly alcoholic grandfather, who possibly beats his wife. Their two teenage grandsons, discovering the newfound pleasures of cigarettes and sex (though not necessarily in that order). And their mum and dad, in their mid-thirties but spiritually and sexually desiccated and on the brink of having affairs with others. In this family, the ties that bind are severed, strengthened, and then severed again. And in the end, despite an unexpected death and the promise of a birth, not much has changed for the majority of characters on stage. Not usually the stuff of which uplifting plays are made of. And truth be told, taking in this beautifully bleak play is about as inspiring as waking up to a cold, overcast Sunday morning. So why is Griffin’s production essential viewing? For a few reasons. It’s your and my life writ large, heartbreakingly rendered and laced with an emotional authenticity thanks to Stephen’s pitch-perfect dialogue. It’s also largely due to director Jonathan Berry. Aided by sound designer Brett Masteller’s gorgeously melancholic music, as well as scenic designer Marianna Czaszar’s cavernous and sumptuously squalid black box of a set, Berry has staged the play so that the three generations are onstage practically the entire time, visible even when not actively participating in a scene. The cumulative effect is one in which the complete stage picture looks and feels symmetrically balanced only when all three sets of characters are visible onstage, a clever visual representation of Stephens’ main point. That no matter how often we may think we should or could sever those painful family ties, they’re intrinsic to who we are, and oftentimes what we pass along to the next generation. I’m reminded of what Philip Larkin once famously wrote: “They fuck you up, your mom and dad/They may not mean to, but they do/They fill you with the faults they had/And add some extra, just for you.” Highly recommended, but definitely not the happiest show in town. (Fabrizio O. Almeida)