by Dennis Polkow
October 6, 2008Filed under: 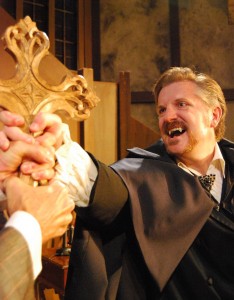 This is the Bob Hall and David Richmond off-Broadway adaptation, meant to be sexy and funny and preceding subsequent, admittedly more biting, satirical Draculas by decades. Given the opening-night audience reaction, which was deadpan serious (myself and the critic next to me were laughing now and then, but we seemed to be the only ones doing so and, after awhile, we were even getting looks from vampire purists), there is a disconnect here, whether by accident or design.

But the work is staged and acted so seriously that the confusion is understandable: every time Dracula appears, the fog machines go into overdrive; at one point the lights go out and a glow-in-the-dark bat is hovering over the audience in true William Castle fashion; at another point, a crucifix explodes into flames, which can have other meanings, especially in the suburbs. Meanwhile, Renfield is constantly chasing flies to eat while his doctors and the hero and heroine seem to think that they’re doing the real deal but with a bewildering variety of shifting accents.

But the biggest problem is that unlike the Poe show, where there was constant interaction between cast and audience that was helped along by having various scenes staged in various rooms of the house, here, we are ushered in a side door and stay put in one room with all of the action off to one side, as if we aren’t even there. (Dennis Polkow)