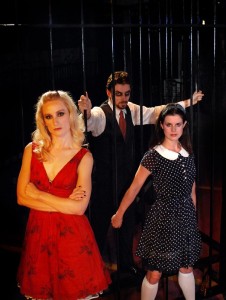 “What’s the robbery of a bank compared to the founding of a bank?” quips Gregory Hardigan as bandit Mack the Knife as he is about to be hanged, a powerful reminder that Kurt Weill’s 1928 “The Threepenny Opera,” though now 80 years old, could well have been taken right out of today’s headlines.

Few shows have redefined musical theater the way that this one has, so far ahead of its time that it has rarely been presented without censorship or controversy, its many detractors ranging from Adolf Hitler to Joseph McCarthy.

The first musical ever presented by the Hypocrites, this is the Marc Blitzstein 1954 English adaptation but freely adapted with uncredited contemporary commentary that instill more immediacy and sense of Bertolt Brecht’s original; one of the beggars, we are told, is Sarah Palin with an outstretched hand, “searching for a clue.”

The beggars interact with the audience, most of whom surround the performers across two large, kidney-shaped tables and are, in true Brechtian fashion, often pushed beyond the theatrical “fourth wall” that Brecht fought so hard to pull down. At one climactic moment, for instance, a cell phone rings, and the performers become indignant until a cast member ends up discovering that it’s his own, uttering a public and penitent “Excuse me,” and takes a call that we all overhear. Brecht would have loved it.

Most productions of “Threepenny Opera” bracket the drama and spotlight the songs, but here, the Hypocrites bracket the songs and spotlight the drama. The songs themselves come across as patchy quiltwork as amplification is suddenly beefed way up with louder sound emanating from the corner than from the performers themselves, throwing balances off and spotlighting vocal limitations of performers which are often considerable, particularly constantly contrasted against first-rate acting chops.

That jarring juxtaposition could well be eliminated, however, with a minimum of vocal coaching and with Weill’s tiny but carefully specified timbre-significant ensemble of instrumentalists incorporated into the mix instead of merely a distant solo piano.

Still, the overall spirit that the Hypocrites achieve is so right—a reminder perhaps, that beggar and actor are often synonyms?—this is time well spent. (Dennis Polkow)