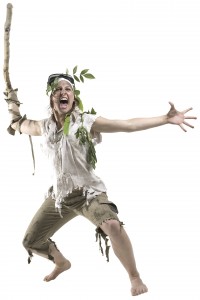 Aviator Amelia Earhart’s 1937 disappearance remains an unsolved mystery, still rife for speculation. In “Amelia Earhart Jungle Princess, ” The New Colony posits that Earhart was rescued from her island landing pad by the amoral Altamont corporation to become their unwitting shill. Ferocious jungle cats have nothing on boardroom beasts.

The piece’s location switches back and forth from the island to corporate headquarters as staff devolves into the savages they are. Flashbacks muddy the narrative and drag the through-line down a bit, and playwright James Asmus needs to punch up the funny. But the competent cast invests the story with necessary energy: Kevin Stangler is spot-on as the gee-whiz Iowa kid struggling with his feelings for the married Earhart; Michael Peters is suitably villainous as the brass-balled Altamont CEO; and Nicholas Hernon scores as the bumbling Douglas, the lackey with a creamy, moral center. It’s smart, primal fun. (Lisa Buscani)