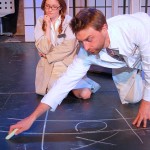 In her director’s program note for Premiere Theatre and Performance’s production of Botho Strauss’s “Seven Doors, ” Patrizia Lombardi Acerra compares the play to sketch comedy, and even relays one cast member’s comment that it is “as if Samuel Beckett were writing for Saturday Night Live.”  Hopefully they’re referring to the glory days of SNL before the writing tanked, because Strauss’s ten brief scenes depicting the darkly funny struggles of everyday people trying to connect, escape and make sense of the world around them (and the otherworld beyond), is incredibly sharp, biting, and much more deserving of an audience’s attention on a Saturday night (Tina Fey’s Sarah Palin notwithstanding).

In a translation by the late University of Chicago Professor Emeritus Peter K. Jansen, Strauss’s at once bleak and boisterous, elusive and accessible, snippet views of human beings crashing and clashing have a deep resonance with contemporary American culture while at the same time being cloaked in strangeness and uncertainty. The cast seemed flummoxed themselves by the script at times, grappling with (and sometimes getting lost in) the highly stylized dialogue; and with each actor juggling multiple roles, the performances felt a bit shaky and unsure, though Michael Norton deserves note as a solid standout in “The Guards.” (To be fair, the performance I saw featured two understudies.)  Nonetheless, I applaud Acerra—as well as the Goethe-Insitut Chicago, a supporter of the project—for bringing this playwright’s bizarrely recognizable world to the Chicago stage. (Valerie Jean Johnson)