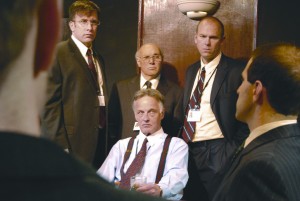 I liked this play a lot when I saw it at the Steppenwolf First Look Festival a few years ago, and I’m surprised it took so long for a local company to stage it. Rick Snyder’s production doesn’t live up to my memories—it’s not as crisp as it should be, the tension slackening where it should be tight—but Jason Wells’ script is so good, it’s worth seeing anyway.

Somewhere in a generic conference room, white men in suits are plotting the fate of nations. The specifics are left vague. Something about an assassination plot and a five-inch-thick peace agreement that nobody will ever bother reading. It’s all abstract, and yet very clear. These men are arrogant and imbecilic, insecure and paranoid, and justifiably spooked when their plan begins to unravel. They are descendants of David Mamet and it seems entirely plausible that men just like this exist somewhere in reality, sweating in their starched shirts and screwing with people’s lives and fuck you if you can’t deal with it. Did I mention it’s a comedy?

The first scene is the strongest, as three middle-aged functionaries confer with their ops guy, sorting through the logistics of killing their target. Darrell W. Cox, sporting a truly bad haircut, gives this trained killer the robotic assurance that you see in highly focused military types. Life, death, it’s all the same to him. “Folks, this can be done,” he says without emotion. “You just have to want to do it.” Eric Burgher, as an outsider unwittingly roped into this mess, is especially good—he looks like a Washington lobbyist who’s about to have his world undone.

As things progress, the men lose their cool and scream like the playground bullies that they are. This is where the production loses some of its snap—the men go from zero to all-out shouting way too often for it to be effective. A last-minute casting replacement may explain some of the problems with rhythm. But who cares when Wells serves up dialogue this sweet. A man’s loyalty is questioned, and the ops guys says don’t worry, “He eats our bread.” You’ve got to love the absurd specificity of that idiom. (Nina Metz)