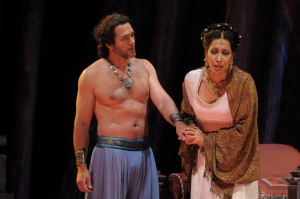 Okay, no one is going to mistake “The Pearl Fishers” for “Carmen,” that’s for sure. “Carmen” is Bizet’s masterpiece, and one of the greatest and most beloved operas of all time. But in a short career tragically cut down in its prime where we have dozens of ideas for projected operas but only a small output of completed operas available to understand how Bizet evolved, experiencing “The Pearl Fishers,” the opera Bizet wrote before “Carmen,” can be immensely illuminating.

The music itself might be well be labeled “Faust lite,” as the influence of Gounod, Bizet’s teacher, particularly on the recitative and choral passages, is embarrassingly obvious. But like Gounod, Bizet knows how to write and milk a pretty tune, and the work’s most famous aria is a crowd-pleaser that is heard throughout the entire three acts. The love triangle that makes up the opera’s static plot could well be called “Norma lite,” as it is a watered-down reworking of that same idea from that opera. There are also touches of Verdi and even some Wagnerian leitmotivs.

What is needed to give the work its due, such as it is, are three technically precise singers who can not only sing their hearts out emotionally but who are also able to blend well together for the work’s carefully crafted duets, trios and ensembles. Unfortunately, this Lyric Opera revival of its production from a decade ago is seldom able to deliver on either count. The famous Act I “friendship” duet is a piece so popular that it was once not uncommon for audience members to duck out after the first act. Here, at least on opening night, the duet was squandered by baritone Nathan Gunn as Zurga and Eric Cutler as Nadir, as the baritone line was inaudible next to the straining, over-loud tenor line; the usual show-stopping raucous reaction was substituted for polite applause of mere recognition. Although the casting of soprano and former Ryan Center alumna Nicole Cabell as priestess Lelia is serviceable, Cabell does not have the floating coloratura that Maureen O’Flynn had the last time around, essential for revealing this role at its best.

This staging of the work, which was hopelessly confused the last time around, has been given a facelift with more colorful sets that make for more visual appeal, but unfortunately, the design team never bothered to read the libretto: the story concerns a Hindu priestess yet the scenery portrays Theravada Buddhism, which has no gods, a central plot device in the story. (Dennis Polkow)