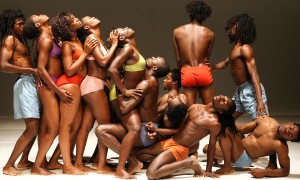 Born in Algiers to a French mother and Algerian father, now living in Toulouse and creating tribal-infused contemporary choreography for dancers from Francophone African countries, Heddy Maalem is something of a post-colonialist scholar’s wet dream. Critical theorists should be braining each other with their dissertations at the chance to deconstruct Maalem’s stark investigations of race and identity. In 2000, Maalem presented “Black Spring,” the first evening-length piece in a trilogy about the brutality of war and Western perspectives of African bodies. The series culminates with a new interpretation of Stravinsky’s “Le Sacre du Printemps” or “The Rite of Spring,” showing this weekend at the Museum of Contemporary Art. Maalem cast fourteen dancers from Mali, Benin, Nigeria, Togo, Mozambique, Senegal and Martinique—all trained in contemporary dance as well as the traditional dances of their home countries. Maalem himself was a boxer and martial artist before discovering dance in his late twenties. The truculent movements of his scantily, if vibrantly clad cast presents a tangle of complications—often uncomfortable ones—which Maalem has no interest in unraveling.

“I think that in the relationships we have with others it is important to be able to distinguish what disturbs our vision rather than trying to shed light on absolutely everything,” Maalem said in an interview at the premiere of “Le Sacre du Printemps” in 2005. “I find that extremely dangerous.”

For better or worse, Maalem fearlessly treads into ambiguous, disturbing realms. “Le Sacre du Printemps” is set in Lagos, Nigeria, a megalopolis where Maalem became aware of “something extremely vital” in death—“a brilliance [that] overwhelms us with despair.” Beauty and horror meet in the choreography; Maalem compares a gesture by dancer Nathalie Rinaldi to both the exhaustion experienced by endurance athletes—“le petit moment du faiblesse”—and the movements of Rwandans fatigued by the repetitive task of slaughtering their fellow countrymen with machetes.

These images of violence in Africa spring from the imagination of a white French-Algerian and are embodied by scantily clad African dancers. Maalem states that the piece is not “a question about a black body but a human one,” yet there’s a lot of squirm-inducing, decadent-Orient-in-the-refined-Occident-gaze material here, particularly when placed in a relatively highbrow venue like the MCA. It’s only appropriate that Maalem should further complicate matters by choosing the classical European score about pagan ritual so innovative and controversial it incited at riot at its 1913 premiere.

While Maalem’s “Le Sacre du Printemps” may not have prompted any chair throwing as of yet, it has been met with a fair share of critical ambivalence. In Dance Magazine, Eva Yaa Asantewaa rhetorically ponders the artist’s intent: “To inflame? To defuse? To subvert?” The most accurate response this query would probably be “all three”; Maalem is clearly not interested in drawing any tidy conclusions about race and colonialism. Despair, loss, brutality, mob mentality and sexual violence hang heavy over the stomping, writhing, thunderous choreography, broken by moments of tenderness, but finally resulting in human sacrifice.

When talking about his position as a white choreographer working with a black cast, Maalem quotes the poet Francois Villon: “’in my country, naked as a worm, but costumed as a president, nothing is sure but uncertainty, I seem to win everything, but lose all.’

“Maybe these pieces, ‘Black Spring’ and ‘The Rite of Spring’ are on that wavelength,” Maalem continues. “They have the same irreconcilability so I apply myself knowing perhaps it is a battle I have already lost attempting to connect something which was not disconnected, but demolished with an axe.”