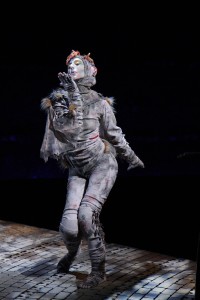 Written during the second “war to end all wars, ” C.S. Lewis’ “The Screwtape Letters” is a literate look at spiritual warfare from The Devil’s point of view. Demon Screwtape (Max McLean) counsels bumbling junior demon Wormwood in his efforts to corrupt a young man who has just converted to Christianity. It’s a witty look at faith and the faithful.

The producers today announced an extension to open run and a cast turnover. (Chris Jones just wrote about the success of this production.) Here, from the press release, about the casting changes: “Well known Chicago actor Peter Kevoian, who recently appeared as the Wizard in the Chicago company of Wicked, will replace Max McLean in the starring role in THE SCREWTAPE LETTERS, the entertaining hit production presented by Fellowship for the Performing Arts at The Mercury Theater, 3745 N. Southport Avenue. Aislinn J. Mulligan will take over the role of Toadpipe, his demon secretary.”