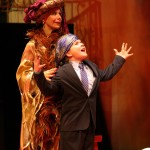 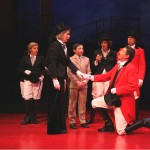 “Your stock broker wants to say ‘hello’ before he jumps out the window, ” relates Ito the housekeeper (Ghuon “Max” Chung) in “Mame.” The time is 1929 but this 1966 Broadway gem is being served up in an elaborate and colorful production at Drury Lane Oakbrook that hardly reflects the fact that lean times are making a comeback. But if times are tough, Auntie Mame and her colorful cohorts are the perfect antidote: “Life is a banquet, but most poor sons of bitches are starving to death.”

A wealthy and eccentric woman who loses everything in the crash, Mame (Barbara Robertson, although Kat Taylor takes over the role after November 16) teaches us that with enough imagination, improvisation, curiosity and optimism that there is so much more to living life than mere money. Any day is a holiday to Mame (“It’s Today”), and even Christmas can be created from scratch on demand (“We Need a Little Christmas”). It’s a lesson that she attempts to teach her nephew Patrick (Liam Byrnes and later in life, Ryan Reilly), who comes to her a well-off but sheltered and attention-starved orphan who ends up engaged to a society girl whose family worries about “the right kind of people” moving in to their restricted Connecticut community. Mame gives them all a much-needed trip to the woodshed without becoming confrontational or preachy, another valuable lesson for our era of ultra-polarized politics.

Robertson makes a splendid Mame, bringing the needed comedy and pathos to the role, and singing those wonderful Jerry Herman songs supported by a rousing mini-Big Band. And though you could quibble that veteran Chicago character actress Arlene Robertson (no relation) doesn’t exactly fit the mold of “the first lady of the American theater” Vera Charles, her wry delivery, singing ability and comic timing rescue the performance. Director William Osetek has restored some cutting-edge lines from the non-musical version of the play and brings home the message of tolerance while raising suburban eyebrows by having Mame and Vera hysterically plant a huge kiss on one another when they meet Patrick’s bigoted in-laws. Both Patricks are impressive, but Byrnes’ performance as young Patrick is a standout with his superb singing and the acting trajectory he has to make with the character.

Drury Lane Oakbrook has settled in as the best regional theater in the area consistently doing musicals and some of the gems that begin there are starting to make their way to Drury Lane Water Tower Place and are as good as—and in some cases better—than far more expensive musicals currently playing downtown. (Dennis Polkow)