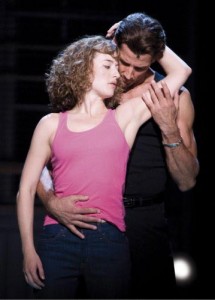 It was one of the most-anticipated pre-Broadway openings in recent memory, and I had informed friends and colleagues all week long leading to the premiere of “Dirty Dancing—The Classic Story on Stage” that I was genuinely bubbly for what would hopefully amount to—at the very least—a feel-good toe-tapping dance show. But this show didn’t make me tap my toes. And it certainly didn’t make me feel good.

This stage version, at Chicago’s Cadillac Palace before traveling to Boston, Los Angeles and finally to the Great White Way, is of course based on the 1987 sleeper-hit film of the same name. It chronicles the coming-of-age story of Frances “Baby” Houseman, an idealistic teenage girl hungry to change the world, but for the moment enjoying the last wisps of innocence with her family at a holiday resort in the summer of 1963. An unlikely romance blooms with the camp’s sexy dance instructor, Johnny, and dance lessons lead to Baby’s mental and physical transition into womanhood. The film was blessed with the great chemistry between stars Jennifer Grey and Patrick Swayze, a strong supporting cast who delivered writer Eleanor Bergstein’s wooden dialogue with charming aplomb, and two killer soundtrack albums’ worth of music that went multi-platinum on their own. The stage show is not as lucky. There is no chemistry between stage leads Josef Brown (Johnny) and Amanda Leigh Cobb (Baby), the supporting players are unmemorable, the musical numbers are cruise-ship quality at best, and the entire experience is dramatically inert.

I don’t know director James Powell’s body of work but my hunch is that he’s never been at the helm of a major musical before. His work here is as clumsy and awkward as Baby’s initial dance steps. He shows little understanding for the synergy between music and drama, and cannot transition nor focus a scene to save his life. Worse, he’s been given every theatrical tinker toy with which to create—turntables, panels, levitating platforms, concert lights, a half-oval-shaped IMAX-type screen on which to project dazzling video—and yet is simply content to show them off rather then use them to effectively tell a story. Scenes fizzle out instead of melding into one another. A clump of dancers oftentimes fade into a visual monotony. And like a loud radio that someone’s forgotten to turn off, there is a continuous stream of music (dozens of songs, period instrumentals and full-blown numbers make up the evening) that ultimately blends into a two-hour bombastic wall of sound. Powell is incapable of manipulating a successful applause button for some numbers (which must be maddening to his hard-working ensemble) and for a show with “dancing” in its title, there’s far too little dance to enjoy, let alone to assess—co-choreographers Kate Champion and Craig Wilson’s work here limited to some sensual but rarely sizzling Latin ballroom routines, the showcasing of their female dancers’ amazing 180-degree leg extensions and battements, and some high-energy hoofing. As for Bergstein’s book, it is needlessly over-bloated with scenes that could have been cut or re-imagined for the stage. Instead, this show painstakingly goes through the burden of re-creating each and every moment from the movie, down to the last persnickety detail. If the creators wanted the movie on stage, they accomplished this. But since the lackluster performances and dancing never erase the memory of the film, it becomes boring to sit through. When the author does attempt to inject social consciousness into this piece of fluff—perfunctory references to Vietnam; “We Shall Overcome” sung by busboys turned Civil Rights activists—the results are tacky at best, transparently tasteless at worst. If you really care about supporting theater that has something to say about America on the eve of social change you have one final week to catch Court Theatre and director Charles Newell’s exceptional production of Tony Kushner and Jeanine Tesori’s “Caroline, or Change,” a musical also incidentally also set in 1963.

At the end of the day there is simply no point for this stage show to exist other than to milk the “Dirty Dancing” franchise dry, exploit the eighties nostalgia craze and get those people who saw the movie in the theaters twenty years ago—now grown up with jobs—to pay ten times as much to see it in a theater “enacted by meat puppets”, as Financial Times drama critic Ian Shuttleworth so memorably phrased in his review of the original London show. Look, I have nothing against creating a show around a group’s song canon or, as in this case, two best-selling soundtrack albums and a movie. I thought the creativity displayed in “Mamma Mia!” made it one of the best musicals of this decade, and I thoroughly enjoyed the stage version of “Saturday Night Fever” on Broadway. But the creators entrusted with those musical properties at least tried to do something theatrical with the wealth of musical material they had inherited, be it the creation of a wonderfully self-ironic book with which to link ABBA songs (as in the case of the former), or (as in the latter) the transformation of Bee Gees songs from disco kitsch into genuine show tunes belted out by real characters on stage. And although the majority of songs in “Dirty Dancing” are indeed never performed by any important characters in the play, and simply exist as background music playing on a radio, you can still have had drama through dance. Anyone remember Susan Stroman and John Wiedman’s 2000 Tony Award-winning best musical “Contact,” that used pre-recorded music and no singing to tell three dance plays? If not, Google “Contact musical Broadway” and check out how a recording of Robert Palmer’s “Simply Irresistible” is used, along with some inventive swing choreography, to convey a poignant story about the liberating, sensual and redemptive powers of dance, without one single word of dialogue uttered. Drama doesn’t come automatically just because you perform something in a theater, and it’s disconcerting to think that Eleanor Bergstein, James Powell et al believe they have made “theater” with “Dirty Dancing,” or anything approximating something like the aforementioned shows in terms of artistry, emotion or theatricality.

“Dirty Dancing—The Classic Story on Stage” is quite simply one of the laziest pieces of theater-making that I have ever witnessed, seemingly devoid of any imagination or ambition other than to quite literally throw the movie on stage, which it does with all the thoughtfulness and clumsiness of a toddler flinging his food-filled plate against a wall. Indeed, a more appropriate tag line for this show would have been “The Classic Story Shoved on Stage.” This may be acceptable for some—the largest advance sale in London West End theater history; record-breaking productions around the globe suggests as much—but in light of the economy and with the show’s tickets ranging in price from $35 to a staggering $155 for “premium” seats, audiences need to demand more than an overpriced ultimate DVD-extra served up as ersatz drama.

Given that the jury is still out on the Broadway-bound stage version of “9 to 5,” that “Cry-Baby” has flopped and closed in New York and that Broadway insiders have been buzzing about the well-known director/choreographer flown out to Seattle to doctor the ailing “Shrek” musical, maybe they finally are.