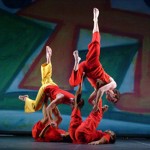 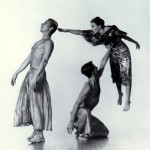 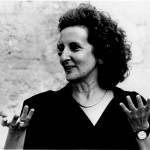 It has certainly been said that the avant-garde is dead, and the label has certainly been too often misused, but there are still those out there creating work that defies expectation and creates new rules.  Perhaps Trisha Brown is one of those people.  Since the 1960s, the beginning of this dancemaker’s career, she has embraced progress and led her company to the forefront of contemporary dance. The most exciting thing about the company’s upcoming engagement at The Dance Center of Columbia College is the opportunity to see examples of Ms. Brown’s rich and diverse dance history in one program.  “Four Decades of Dance”  will include works reaching back to 1971 for a study in gestural repetition called “Accumulation” to 2003’s aptly titled “PRESENT TENSE,” described as featuring “breathtaking lifts and raucous partnering that is distinctly Trisha Brown.”  But that’s not all folks.  How about a collaboration with artist Robert Rauschenberg accompanied by a local marching band playing outside the theater walls?  This show is going to be a wild ride.  Jump in and hang on. (William Scott)