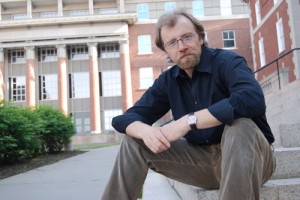 “Jon,” the creepy and beautiful short story by George Saunders about corporate-owned trendsetters living in a bubble of product-testing and commercial-producing, has its world premiere as an adaptation for stage by Collaboraction theater company. I spoke to Saunders—critically acclaimed American short story writer, recent winner of a MacArthur genius grant, and Chicago native—about watching his story take life.

You’ve had a few of your short stories adapted for the stage now, although “Jon” is the first show in Chicago that I know of. You’re also known for being a famous revisionist. Can you tell me about how the adaptation process worked and your experience being part of a collaborating team that adapted the story?

This is the third time I’ve had my work produced, and I love it. Since I don’t do theater regularly, it’s a treat for me. I’m kind of an obsessive story writer, so its nice to have a break and let somebody else in another area lead the way, and all my experiences have been positive. I’ve done some screenwriting and it’s the same thing—I can relax. What’s interesting is, “Pastoralia” was done in New York, and the end production didn’t seem like something I had done. When I work with theater companies adapting my work, I’m involved in just the play script part, which often comes down to just reading drafts. With “Jon” in particular, there are a lot of “voicey” things going on, so if there’s some kind of action that gets written in that needed his voice, I could do that. For example, how do you show onstage a sentence like “over the next six months the relationship went downhill.” To be literally faithful to story you’d have to do pages of explanation, but you can create parallel action to get you there more quickly.

You’re obviously most famous for your short stories, which you’ve compared to jokes in that they’re “risky” enterprises that can quickly fall on their faces—in other words, it’s immediately and painfully obvious when they work and when they don’t. What do you make of theatrical enterprises as risks, and the relationship between narrative and play script?

To be honest, theater is still a kind of a mystery to me, but the whole model of storytelling works in a similar way. I have to keep it really simply for myself, but what I think it is: In the first line of the story, the first motion of a play, you instantly generate out of 360 degrees of possibility a single expectation. The success of the next beat is how well you fulfill that expectation, and it always comes down to a matter of modulating future events. For me, whether it’s a play or a story, the key is to keep in the crazy space where you’re with me, and I go just a little faster than you thought I was gonna go, and to sustain that pace, so right away one thing I realized is that I don’t know how to do that in theater. The surface tension has to be kept, to put it a different way, with different tensions as you transfer from word to stage.

“Jon” is often seen as a kind of “poster child” Saunders story-this totally hilarious and biting satire about consumerism, corporate culture, pop culture, branding. I was intrigued that “Jon” was recently chosen by Jeffrey Eugenides for a selection of “love stories.” What do you make of that?

I actually thought that was just right. For me its funny, I don’t really care that much about the consumer-criticism stuff—I’m not a Luddite; I’m of two minds about it. I just see it as a feature of my culture, both sort of horrible and sort of wonderful. But for me it’s honestly really easy to generate that stuff—I could make up commercials for the rest of my life. When I was growing up, I saw literature as something very distinct from my life, and one day I realized, well if I can just do this kind of writing at will, maybe that’s not a bad thing. But it’s not the point, rather just more generative. Under the surface of this language of consumer culture the other, more interesting things are going on. With “Jon,” I found out early something else has to happen to make it a story. “Jon” as well as other love stories in that book [My Mistresses’ Sparrow is Dead] get talked about as critiques of American pop culture, but for me the love stories is what they’re all about.

The moments I remember best in the story are when the main character, Jon/Randy, is trying to describe the girl he loves, but is unable to do so because he lacks the language, the vocabulary. Hearing him try to articulate is so moving because of that sense that he’s stunted by this linguistic determinism.

Exactly, and that’s the paradox. Despite the world he lives in, his emotion is not stunted, although his language is. He feels, but his lens, his speaker is too small, and it doesn’t mean he’s not feeling. That experience, for me, is somehow where we are as a culture. More than ever, forces are conspiring to make us stunted at communication. If you’re bombarded by inarticulateness long enough, after you go a long time without real communication, after time your emotions start to change. That is the frightening thing to me—that the inability to express yourself results ultimately in the inability to feel. I’ve certainly found in my own life that when I’m stunted in my expression, I shrink emotionally. Conversely, when you can express higher concepts, something in your heart expands. I suppose that’s part of what makes me so delighted to help adapt my work for stage. I worry all the time about my ability to communicate with a wide audience, and seeing young actors find emotion in it brings me a huge amount of comfort—that’s relatable, as they say in Hollywood.