by Monica Westin
November 2, 2008Filed under: 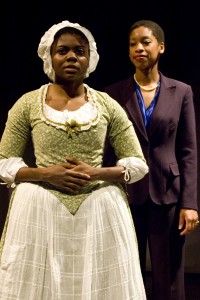 The smartest show you’ll see all year. A left-wing activist and a conservative academic, both black, confront one another on the grounds of George Washington’s slave quarters, where a proposed American Museum of Liberty would be built. No rhetorical punches are pulled as the two exchange personal diatribes and arguments so freshly wrought that the show literally feels as though it’s staging this debate for the first time. The true story of Oney Judge, a slave of Washington’s, is juxtaposed with the story so elegantly, so astutely, that both stories haunt one another in a play that refuses to simplify the issue of race in America and the history machine itself. What dazzles about this show is its raw intelligence, visible in every aspect of the production, from the artful depiction of the presence and absence of history, through shadows, literal projections and echoing of lines from past to present; to playing with the convention of the historical reenactment business; to the participation in and then deconstruction of political speech codes. The actors understand that to keep up, they have to be as complex and shifting as the rest, showing admirable restraint, and even the set, resembling the blueprints and foundation of a house, is a thought-provoking addition to the show. (Monica Westin)