by Sharon Hoyer
November 3, 2008Filed under: 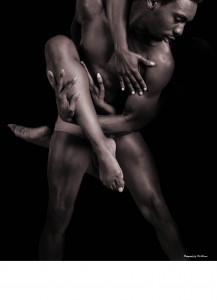 In describing the mission of Deeply Rooted Dance Theater, Artistic Director Kevin Iega Jeff states, “once you are able to reflect on who you are in creation—no matter who you are—once you understand the value of yourself, you can then bring that value to the world.” The evening of repertory presented by Deeply Rooted this week at the Harris is just such a personal reflection—an overview of a celebrated world-class company that maintains strong investment in the local community.

The program “Hidden Treasures” starts with a suite that migrates through history and space, beginning with “Olowa,” a duet inspired by African ancestry, traveling through the middle passage in “The Dance We Dance” and into the civil-rights movement with two pieces—“Change is Gonna Come” by Krystal Hall Glass and an adagio by Jeff, along with associate director Gary Abbott, that celebrates the shared vision of civil-rights activists of all colors. The suite is followed by “Church of Nations,” a piece “inspired by a statement George Bush Senior made prior to going into the war in Iraq,” Jeff explains. “Bush said he had consulted his spiritual advisers and those advisers said it was alright for us to go to war. ‘Church of Nations’ poses the question: can we justify death and destruction in the name of God? Is it a religious issue or a political issue?” The first half of the program ends with “Surrender,” a hopeful vision of a world that has transcended poverty, violence and hate.

Act II returns to the local level with performances from two of the Deeply Rooted community ensembles—Mature Hot Women and an ensemble of professional-level, non-career dancers. Also featured is a personal reflection by Jeff on the death of his sister, who suffered a nervous breakdown and passed away in 1997.

“We as a society have a problem talking about mental illness without it having a sort of stigma,” Jeff says in describing “Naemah’s Room.” “I use her life as an anchor, but I also use other people I see in similar conditions to tell the story. ‘Naemah’s Room’ examines mental illness; it examines the abuse women suffer and even the abuse men suffer, in societal expectations and pressure to behave in a less-than-nurturing way.”

The evening closes with the upbeat “Heaven,” a high-energy, accessible work drawn from social dances around the world. “Heaven being a place we create through joy of being together,” Jeff says. “It’s an audience favorite, I think, because they can see themselves dancing in the piece.” (Sharon Hoyer)