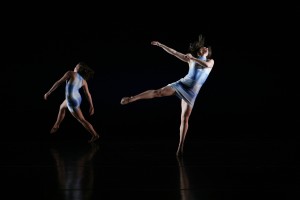 The distance in this case is measured with rigor, in potent, disciplined strokes. Two new pieces, each fueled by near uninterrupted momentum, stand in bold yet harmonious contrast. In Ashleigh Leite’s “I Live in Perfect,” limbs seem to reach beyond their physical limits to slice massive curves across the stage; straightened arms push aside the air or manipulate limbs of fellow dancers with an urgency evident on each face. Place this beside Molly Shanahan’s undulating, qi-driven “Stamina of Curiosity: Everywhen” and you have two poles of contemporary choreography: dancerly extension and precision of form versus profoundly organic, internally generated movement. Shanahan’s gorgeously personal choreography sits well on this company; rippling spines move from floor to the air to the backs of others on waves of palpable energy, bodies weaving intricate jungle patterns with orgasmic reverie. Conspicuous nods to Eastern forms (like when the cast holds warrior II pose in unison as though suddenly in yoga class) could easily fail but, thanks to the unflagging physical focus of the company, fit in the piece with convincing sincerity. The momentum is maintained with Shapiro and Smith’s spellbinding, sensuous and witty “To Have and to Hold,” which uses three parallel benches to play with shifting horizontal levels and chain reactions of cartwheels, log rolls and somersaults, reveling in the sheer joy of movement. (Sharon Hoyer)