by Monica Westin
November 9, 2008Filed under: 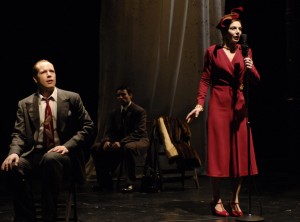 The real tragedy of this unconvincing production lies in the painfully obvious contrast between the overwhelming talent of the SITI company and what ends up being an underbaked adaptation of the Scottish play that isn’t quite “Macbeth” but firmly prevents itself from being anything else. “Radio Macbeth” is literally a staged, painfully condensed reading where actors play… actors, but the meta-theater immediately feels like a cheap trick: there are hints of relationships between characters, but nothing that holds attention for long, and there are almost no lines that aren’t Shakespeare’s. The show purports to be an actors’ rehearsal of “Macbeth” taking place in a late-night abandoned building, and focusing on the soundscape of the show—the strongest elements of the show are the striking sound effects created by a variety of microphones and the actors’ obvious mastery of their voices as they deftly plow through lines. It’s not clear, then, why the actors spend all their time during this rehearsal rearranging endless chairs for no apparent reason, putting on clothes, taking off clothes and circling each other in stilted, choreographed ways. The visual element ends up being another tragic sacrifice. More often than not, “Radio Macbeth” comes across as presumptuous and indulgent, and more frustratingly, it doesn’t go anywhere, for the abridging that’s done to get the show under ninety minutes cuts far too much of the original play for it to remain coherent. (Monica Westin)