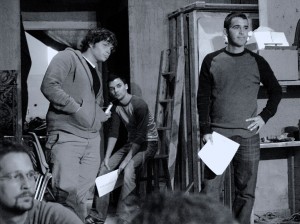 Adam Webster, founding artistic director of the side project theater, returns to his original mission of making the intimate space of his theater a second home to area artists in what he calls an “open door policy” for artists to direct/write/act without creating a traditional ensemble. His ambitious year-long one-act festival in eight parts, “Cut to the Quick” debuts this weekend, with the overall theme of thwarted love, and the way we communicate (or fail to), which will allow Webster to accommodate a huge number of artists he admires as well as trying his hand at crafting disparate pieces into a coherent evening of theater. I spoke with him the weekend before the show opens to hear a little more about this selection and self-described curatorial process.

For a short-play festival, yours seem to be more intent than usual on grouping plays so that each evening creates a single journey, and the different evenings speak to each other. Can you tell me more about that process?

Yeah, curating is a helpful way for me to view what my role has been—it’s all about visualizing different varieties of blending between plays. Most of the shows I’ve chosen also don’t have definitive endings, so the audience has to make conclusions themselves.

Do the shows then somewhat dissolve together?

Hopefully there will be an arc to each evening, at least as I see it in my head, and in rehearsals it’s seemed to work that way. We have several different approaches to a certain theme—for example, the latter half of the ten-minute plays evening has five shows in it that have something to do with war—although I would hate to call it a “war component”—that also incorporates the romantic relationship elements that dominate the plays of the first half of the evening… drawing towards a grittier interpersonal darker side of humanity. So out of the relationship half there continues a thread of how relationships are informed by aggression, and it evolves from there, in a connected but different tone.

It sounds like it took a lot of work—or luck—to get these plays to work in an intertextual, narrative way. How did that come about?

As part of the side project’s mission, I accept new plays all the time. I’ve collected something like 200 plays, and the ones I can’t forget about ended up in a pile. It helped having those seven or eight plays to start.When I was ready to start the festival I read those plays and said, you know, these kind of go together in a broad sense, how can we fill in gaps and take the audience on a real journey?

“Cut to the Quick” consists of 19 plays presented in three programs. The programs are: “Splayed Verbiage,” ten-minute-plays about love and war, runs Fri-Sat at 7:30; Sundays at 2pm; “Static/Cling,” three pieces surrounding the language of families, runs Wednesdays at 7:30; Sundays at 5pm. “Splinters & Shrapnel,” four pieces exploring our skewed world and how we skew it, runs Thursdays and Sundays at 7:30. More details at thesideproject.net. (Monica Westin)