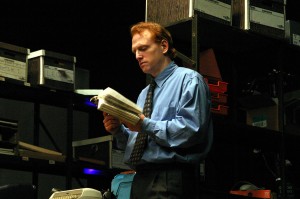 In a grungy back office of indeterminate use, one employee is having computer troubles. To kill time, he picks up a copy of “The Great Gatsby,” opens to the first page and starts to read aloud. Thus begins a theatrical experiment and monumental dramatic contract: an epic journey through what many consider to be the great American novel, read cover-to-cover by New York-based experimental theater company Elevator Repair Service.

Comedian Andy Kaufman was notorious for pulling the same stunt to drive audiences out of his stand-up shows, whipping out the book and reading aloud until he’d cleared the room. ERS asks the opposite of their audience, using the full text of Fitzgerald’s masterpiece not as a prank but, in the words of director John Collins, an act of “radical commitment.”  “GATZ” is a feat of theater that could have been pulled straight from a Borges story: an adaptation so accurate, it perfectly replicates the original.

Yet “GATZ” cannot in fairness be called an adaptation; while a play-like staging, with actors delivering lines of dialogue in character, it is still a reading of novel—Scott Shepherd, the narrator/Nick, has the book in his hand the entire show. However, adaptation was the original intent when the seeds of the project were sewn ten years ago. ERS had planned to do a more conventional production, but Collins became frustrated with the editing process immediately.

“Here was a novel I loved, written in a way that made every single word seem necessary—you could say that of many great works of literature, but moreso of ‘Gatsby’ because it’s so spare. Then the idea came up—maybe thinking a little about Andy Kaufman—well, what if we do that? What if we do everything? What if we don’t cut a single word?”

What if? In an age of goldfish-like attention spans, inviting an audience to sit six-plus hours (with a dinner break) to listen to a novel start to finish is a pretty gutsy move; it gives Collins the jitters at each new venue. “It’s scary, taking this thing to a new city,” he says. “But I’ve watched every performance. Not much happens for the first 20 minutes—the scene is being set…Gatsby doesn’t even show up until chapter three—and there’s a sense of concern. Do they think we’re just going to read to them for six hours? But after those first twenty minutes, everyone settles in. Your clock sort of slows down; you adapt to the rhythm of it.”

And, in this way, “GATZ” is not so much a play, wherein a group of actors stage a story for a passive audience to absorb, but more an act of collective reading. Most of us know whether or not we’ll finish a book after the first ten or twenty pages. When we make the commitment, when we keep reading and find ourselves becoming engrossed, when a story creeps into the depths of our imagination, a fictional tale can start to color our perception of the real world. The beauty of the ERS staging is that it allows “Gatsby” to unfold much in the same way we would experience it as engaged readers. Shepherd’s character starts out aligned with the audience—just a guy reading out loud—but as the book unfolds, parallels between his co-workers and the characters in “Gatsby” emerge. By the end, the narrator becomes Nick. The book remains in his hand till the final word, but he ceases reading, reciting the text from memory (Shepherd is rumored to have the entire novel in his head), his transformation complete.

“The character goes through a similar awakening,” Collins states. “He starts out a guy who enjoys hearing everyone’s secrets but doesn’t like to get involved. Yet, by the end, he feels responsible. The book is ultimately about him.”

And about us: disinterested voyeurs of a decadent world who become (if Fitzgerald and ERS have done their job well) personally invested, inserting ourselves into the story alongside the narrator/reader. It’s a complex layering of identifications and the anonymous office setting leaves plenty of space for the venn diagram to overlap legibly.

“The story of somebody who leaves home and goes off to try to make a life in a more exciting place and then returns home is a universal story that everyone can relate to,” Collins observes. Because of an ongoing battle with the Fitzgerald estate, “GATZ” has yet to be performed in New York. Hopefully, ERS will enjoy a similar homecoming soon.