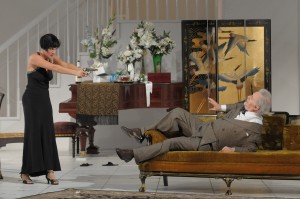 “Lulu” is back in town, and as was true of her first unforgettable trip to Lyric Opera twenty-one years ago that ended up ushering in a golden era of regular modern opera performances at the company that lasted into the new millennium, nothing is ever quite the same during or after her visit. The second and final opera of twelve-tone composer Alban Berg, “Lulu” is an opera unlike any other and immediately polarizes audiences into those transfixed and transformed by the experience and those who find it so disturbing and demanding that they cannot make it through even a single performance. One couple up front noisily left twenty minutes in, and across opening night, about a quarter of the audience left at various points along the way. Those who remained all four hours were often in stunned silence at what they were taking in, even at evening’s end, after which frenzied applause and cheers spontaneously broke out. For those concerned about making it through such a potentially draining experience, Lyric is selling $12 sandwich box suppers between acts, sort of “Lulu lunches.”

Like a black widow spider, the femme fatale has her charms, to be sure, and as Lulu—stunningly performed by German soprano Marlis Petersen—seduces those around her, she is a step ahead of her admirers, each of whom sees her as the ultimate sex object of their fantasies, right down to each supplying a different name, style of dress and persona for her. As Lulu reminds a would-be suitor of the fact that she killed his father, and later, as copulation begins on the couch, she asks if this is the same couch where his father bled to death, you have to admire the woman’s brutal honesty (he doesn’t stop, by the way). When she is asked if she has any morals as she considers the fact that she is now rich immediately after her husband dies of a heart attack after catching her with an admirer, “I don’t know,” she soberly sings, and at least as Petersen plays it, she means it. This is a far cry from the steamy Catherine Malfitano portrayal that made her such a Lyric fixture for a time that Malfitano moved here: Petersen plays Lulu as a vacuous, amoral mirror to all the men—and one woman—who obsess over her. That Petersen does this while singing up a storm and seducing the audience right along with all of them is part of what makes her portrayal as alluring as it is unnerving.

Berg died suddenly of blood poisoning after completing only two of the work’s projected three acts, having left a sketch score of his intentions. At first, Berg’s widow tried to have the work completed, but after Zemlinksy, Schoenberg and Webern all turned her down and expressed that the work should remain an unfinished two-act torso, she steadfastly refused to allow a completion. Only after her death did a completion appear—it had been secretly commissioned by Berg’s publisher all along—premiered in 1979 by Pierre Boulez and now commonplace, although there remain detractors. When Lyric first presented “Lulu” in 1987, the third act was only 8 years old and still such a novelty that there was little question of it being performed, although it was tinkered with by a non-musical director on that occasion. Thus, these performances represent the Chicago premiere of the unaltered completed version in its entirety.

The third act does restore much-needed musical symmetry and some incredibly compelling music that would otherwise lay on the cutting-room floor, but from the opening strains of it, it is clear that we are in a jarringly different sound world than the rest of the opera. Berg used orchestration as an essential story-telling device, and the transition from Act II to III is abrupt. Only when Berg’s own innovative orchestration comes in courtesy of his completed “Lulu” Suite, do we experience his “voice” restored to its full power. Additionally, Acts I and II are magnificently telescoped and the character development complete, but Act III feels haphazard by comparison in a way unimaginable had perfectionist Berg lived to see and hear how these pieces would all “fit” together. It would be great to see alternative completion attempts appear such as are now commonplace with Mozart’s unfinished “Requiem,” for instance, especially now that we know that Schoenberg’s hesitation to complete “Lulu” was because of an anti-Semitic remark of a character—now routinely cut—in Berg’s libretto.

But none of this should scare anyone away from this rare and new production, which benefits enormously by the presence of German baritone Wolfgang Schöne in the dual role of Dr. Schön and Jack the Ripper and by the transparent conducting of Sir Andrew Davis, who knows this complex score inside and out, sometimes literally, as there are sections that are actually written to be played in reverse. Scottish director Paul Curran always allows the music to determine the action (or when appropriate, the lack of action) and designer Kevin Knight goes for a sumptuous but somewhat surreal world—though opting for all-out Expressionism complete with deep, blue shadows in the disturbing climax—always straddling imagination and reality. (Dennis Polkow)