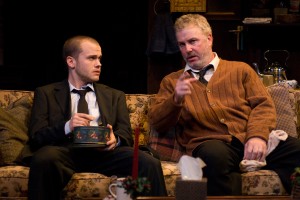 In the vast pantheon of Christmas theater, “Dublin Carol” is unique first and foremost because it is a play powerful and eloquent enough be performed outside of the holiday season. Yes, every minute takes place on Christmas Eve, but Irish playwright Conor McPhearson’s 2000 booze-soaked retrograde riff on “A Christmas Carol” might well be called “Anatomy of an Alcoholic,” so powerfully does it give its audience a phenomenology of what the ravages of alcoholism do to an individual as well as all those around him or her.

We have all been on the receiving end of the endless boozy broadcasts that veteran Chicago actor turned “CSI” television star William Petersen as John relentlessly and convincingly gives in “Carol.” As he is boring and alienating his 20-year-old assistant Mark (Stephen Louis Grush) to death, he tells Mark about a bartender who had “a good listening quality” and adds, “You have it, too.” Sure. It’s called being held hostage. Booze tends to clog up receivers, i.e., the ability to listen and respond to others and their needs, but often does wonders for broadcasting a wealth of useless information that sounds like wisdom under the influence but like the crap it usually is to those who are sober. And yet, every now and then, some truths cut so deeply that even the effects of the bottle cannot fully numb them.

The “redemptive” moment, if you want to call it that, is an unexpected visit from John’s daughter (Nicole Wiesner) that he hasn’t seen in ten years, coming to courageously ask him to come visit her mother and his estranged wife, who is dying of cancer. After an endless self-absorbed checklist of sins of commission and omission and a powerful confession of squandered attempts to get his life back together along the way, his daughter asks if he had to do things all over again, would he do things differently? In an inverted “It’s A Wonderful Life” response, John tells her that he just wishes it had all just “never happened.” “Do you wish I had never happened?” she voices, to no response. It’s one of those moments that you hope will imitate art when it happens in real life, but most often, doesn’t. His silence speaks volumes that she of course, can interpret as a lack of love for her personally, but the reality is that this is a man that hasn’t been able to love himself nor feel much else in decades, and to make matters worse, admits as much, drunk or sober.

Aside from one of the most eloquent monologues on the manic hell of alcoholism from the inside out (McPhearson has made his struggle public and, curiously, his more recent “on the wagon” plays are less monologue-like and feature more character interaction and narrative than his earlier soliloquy-filled “off the wagon” plays) perhaps the most fascinating aspect of “Dublin Carol” is that it does not reach for the formulaic finale of most Yuletide yarns. Exactly what happens to John, who already has ignored his daughter’s plea not to drink before coming to the hospital, is never fully revealed under Steppenwolf ensemble member Amy Morton’s direction (her first Steppenwolf project back home since her Tony Award-nominated Broadway role in “August: Osage County” although she’s set to open the same role in London this week), though fascinatingly, audience members coming out of the opening were sure that it had. Does he go, or does he sit around continuing to soak himself in denial and self-pity? There are strong staging hints in both directions, to be sure, but we are left in the ambiguity that a world anesthetized by alcohol tends to approximate. (Dennis Polkow)