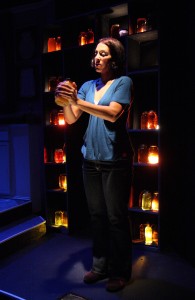 “Jarred: A Hoodoo Comedy” is the title of Tanya Saracho’s new play for Teatro Luna at Chicago Dramatists and, as the title may suggest, the writer is keeping things on the light side this time around. Returning to familiar themes she previously penned in “Lunatica(s) and “Quita Mitos,” Saracho here explores the Latino fascination with superstition and faith-based myths through the story of a jilted young woman who will do anything—including dabbling with Spanish-based witchcraft (Santeria) and magic (Hechiseria)—to get her boyfriend back. It’s deliciously funny and full of the sharp observations (“Ah, why are we saying “white girl” like that? Like it’s an insult. Sounds so angry Latina. We’re not angry Latinas. We’re the evolved kind.”) and sassy quips that have always characterized Saracho’s writing. And as for her trademark Spanish-sprinkled, colloquial English dialogue, I find it to be less slick than as in previous productions and a little more raw, as if the author is more trusting that her English-speaking audience will get the meaning and impact of a line, even when not overly translated. A chunk of text such as “You think there is no other man in the ocean. Pero mi’ja as soon as you get some new cuchichi with somebody else, se te olvida este carbon descara’o” not only sparkles in two languages, but also resonates in performance with a brisk bilingual energy that nobody but Saracho is tapping these days.

If there are any cavils to acknowledge, it’s that at first glance “Jarred”—especially following on the heels of the emotional powerhouse that was “Kita y Fernanda” at Berwyn’s 16th Street Theatre earlier this fall—will seem at best like a Latina version of an episode of “S-e-x-O and the City,” with the appropriate young woman “types” and even a leftover sitcom stock character in the person of “Jarred’s” Lulu, a lovable ditz straight out of “Three’s Company,” not as funny as Suzanne Sommers’ iconic Chrissie Snow, but definitely funnier than her replacement on that series (anyone remember Jenilee Harrrison as cousin Cindy?). More often than not, however, Saracho’s understanding of these “types” defies formula, and her compassion for them—you get a sense that Saracho is writing from the heart because it all smacks of the truth—allows the characters and their egotisms to be drawn without prejudiced. If Saracho was channeling Chekhov in “Kita,” here she reminds me of early Wendy Wasserstein, specifically the late Pulitzer-Prize winner’s 1983 “Isn’t it Romantic” in her understanding of young women, the endurance and limits of female friendships, and the sacrifices and crazy things we’ll do to be loved.

It’s the perfect vehicle for a quintet of actresses to exploit their brains, beauty and bilingual capabilities: Dana Cruz (in the neurotic-obsessive Carrie Bradshaw role); the ravishingly beautiful and strong-willed Yadira Correa (think Samantha because she gets all the great dirty lines); Marie Antoinette Flores as Lulu; and the author herself in a sweetly comedic supporting role. Finally, the incredible work of actress Miranda Gonzales cannot be overstated. Playing diverse “Señoras” (Latina fortune tellers) throughout the play, she assumes no less than three perfectly-sounding Spanish regional dialects with which to handle Saracho’s challenging and quick-paced dialogue.  My prediction?  It will cast a spell on you. (Fabrizio O. Almeida)