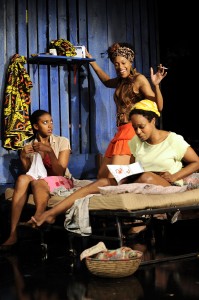 RECOMMENDED
Rape has long been a terrible weapon of war. But the sexual violence associated with the recent civil conflict in the Democratic Republic of the Congo has reached unprecedented levels of brutality.  Lynn Nottage’s “Ruined” is a riveting, poignant examination of Congolese women and their struggle to survive the unspeakable.

Mama Nadi (Saidah Arrika Ekulona) is a savvy businesswoman who not only survives but profits from the war by offering food, drink and female company to soldiers on both sides. She takes in two abused women, shunned by their families for being raped. Together, they navigate the baffling intricacies of wartime politics.

The top-notch ensemble shines throughout. Ekulona’s no-nonsense Mama is a rock of compromise and negotiation; Condola Phyleia Rashad  is luminous as the “ruined” girl Mama hopes to save. But Quincy Tyler Bernstine’s raw portrayal of a woman enslaved by soldiers stops the heart. She is a wonder.
(Lisa Buscani)