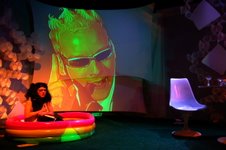 A promising absurdist satire about Marxist revolution and the lampooning of the bourgeoisie that ultimately loses its focus in a crescendo of incoherence and farce gone amok. Beata Pilch works hard to invigorate the story of a middle-class family’s rise and fall in a generic proletariat uprising turned fascist regime, where the feminist daughter alone resists and is destroyed, and there are a lot of choices in the production to admire, from a sixties sitcom laugh track in domestic scenes to an inspired Devo soundtrack. The real problem, though, is that nothing in the story feels particularly fresh, and no matter how much theatricality the production achieves (a lot, and probably worth a visit to admire the acting and technical theater alone), the cleverness of director and talented actors doesn’t accomplish as much as they deserve. While the language of “The Unconquered” is often poetic, there’s a “broken record” trope of repeated lines that simply becomes redundant, and as the main antagonist morphs from a somewhat compelling southern-boy soldier to an Austrian fascist practicing mind control with a TV remote, it’s hard to know if the show asks to be taken seriously at all. There are a few powerful scenes, including an unforgettable John Kahara as the dweeby father who brings roadkill home for dinner during the famine of war, and all four actors work superbly with what they’re given, but Trap Door’s admirable impulse to stage difficult plays outdoes them this time—Betts’ play just doesn’t do anything innovative, and even with all the creativity put into this production, the show feels dated and somewhat derivative. (Monica Westin)