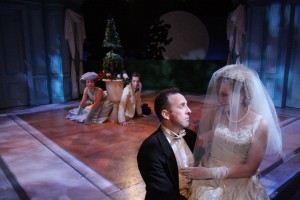 “You say you want a Revolution, well you know, ” there are pieces that talk about it and then again, there are pieces that actually start one. Napoleon considered Beaumarchais’ “The Marriage of Figaro” the straw that broke the camel’s back that ushered in the French Revolution and, even today, France’s leading newspaper Le Figaro is named after the fictional servant who outwits his aristocratic master. How badly did the French public want to see “Figaro” when it finally was staged in 1784 after having been officially banned for six years? So badly that that play had to be moved to a larger theater before opening night and even so, people were actually crushed to death trying to get in. Fast forward almost two-and-a-half centuries, and what comes to mind now for most of us is Mozart’s opera adaptation, still universally performed and far less explicitly political, versus the Beaumarchais original, which is today mostly done merely as a curiosity. Even Remy Bumppo’s ads trumpet, “A risqué look at what’s behind the music.”

Those Mozart and opera lovers who will doubtless inevitably catch this production will be immediately struck by the fact that this production weighs in at less than two hours, including a single intermission, whereas an uncut version of the opera can take up to four hours. Much has been edited and altered—sometimes entire scenes and characters are missing while contemporary slang referring to male anatomy is added—in this free adaptation and translation by Ranjit Bolt. Yes, you do miss Mozart’s music when situations arise that seem to demand hearing it, so much so that Remy Bumppo has added other music, much of it in a post-World War II Euro-pop style associated with contemporary French farce which further underlines the comedy rather than the serious issues behind the comedy. A particularly fun moment is when the maids all set aside their dust mops and end up picking up their skirts and aprons to do an impromptu “Can-Can,” complete with Offenbach’s music.

What often remains ambiguous, however, are the class distinctions that need to be drawn to make the action credible. Yes, Figaro is given a provincial Robin Leach-like British accent but he comes off as if he owns the place, whereas the Count is initially monotone and timid and only slightly better-dressed and could well pass as the same age as Figaro. (The comedy depends on the fact that the Count is old, rotund and decrepit, making his interest in fulfilling his “rights” as master of the house with his much younger and more handsome valet’s girlish fiancé all the more outrageous.)

But there are aspects of this production aside from the fact of how rarely such an historically important play is performed that make it worthwhile, particularly the sight gags and comic timing, which are superbly done and fun. And the timely discussions about what politics, if anything, has to do with intelligence and the notion that truths are lies that are repeated often enough to be believed got the biggest laughs in these waning days of a vocabulary-challenged administration that likes preemptive strikes and sees hallucinatory WMDs. “If things keep up as they are,” muses the Count, “the next thing you know, the lower classes will be running the whole show.” (Dennis Polkow)