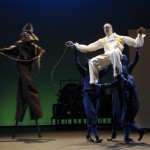 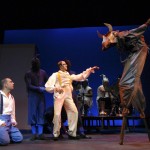 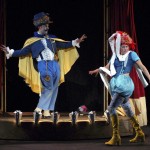 “In the puppet theater, the text is important, but not as important as the performance itself,” says Blair Thomas, founder and artistic director of the eponymous Blair Thomas & Company, the puppet theater he established in 2002. For six years, the Chicago-based company has focused primarily on touring shows, traveling the globe with their highly unique, multi-dimensional productions. 2008, however, marks the year that Thomas and company have decided to establish new roots in Chicago, launching their premiere season in the city. Following their inaugural show at DCA Theatre this fall, “Cabaret of Desire,” a comedic look at poet Frederico Garcia Lorca (directed by Hypocrites’ Sean Graney), Thomas moves his crew to the Museum of Contemporary Art this week with the Zen Buddhist parable, “The Ox-Herder’s Tale.”

The decision to initiate a home-city season, Thomas explains, “is to establish a regular presence in the city, and to participate in the dialogue that exists in the creation of new work in Chicago.” Founder of the lauded Chicago spectacle theater, Redmoon, Thomas left the company in 1998 to follow other artistic pursuits, including teaching at the School of the Art Institute and co-curating the Chicago International Puppet Festival. Interested in puppet theater from a young age, Thomas is a self-taught puppeteer and puppet maker, combining his background in the traditional actors’ theater with his interest in visual art and performance to explore the unique possibilities of a staged world where puppets are hardly pawns, they are the stars of the show.

“[Most important] is what is said by the presence of the puppets onstage, what gets said by the other visual elements that are incorporated. So the language that is being used in the puppet theater is innately more collaborative because its got the elements of actors’ theater—dramaturgy, story—that are going on, but you also have the physical properties of the kind of puppet you’re working with and the fabricated environment that its functioning under. And then I choose to incorporate music as a primary component as well. I want to find text that allows these other forms to come to fruition.”

And so Thomas was drawn to the story of “The Ox-Herder,” a fable told through a series of ten paintings, each accompanied by a short verse that, while not well-known in the general Western culture, has inspired various interpretations and distinctive depictions from a slew of visual artists throughout its history. While the texts that correspond to the images, which are not attributed to a single author, certainly play their part in Thomas’ world of “The Ox-Herder’s Tale,” the story is primarily based in the visual images. “The script for ‘The Ox-Herder’s Tale’ is only about fifteen pages long, so it’s a very short  piece of text—though that’s actually a lot of text for the puppet theater. It’s a lot to contend with. For me the source of the primary material for creating work has ranged from musical compositions to poems to, in this case, a collection of paintings. I’m also interested in things that have some sort of resonance in our culture,” says Thomas.

In “The Ox-Herder’s Tale,” music is unquestionably a central element, driven by a continuous live percussion score performed by renowned musicians Michael Zerang and Hamid Drake. But it is, of course, the puppets who take center stage. Utilizing the traditional Japanese puppet style bunraku, which uses life-sized human-doll puppets manipulated by performers masked all in black, as well as a a towering bull, guided by a stilt-walking performer, Thomas’ elaborate creations require the skills and commitment of extremely well-rounded artists to bring them to life. “I look for performers who can deliver lines like an actor, but can also think conceptually like a director in the process as well as have physical skills like a dancer, in some cases be a musician as well,” he explains. “The nexus point of interest in the contemporary puppetry movement is the relationship between the puppeteer and the puppet—it’s a defining characteristic of what’s going on today. The reality is that you can kind of conceive some ideas, but you’ve got to get the puppet in the room, and you’ve got to get the actors in the room, and then the text if there’s text and the music, and you’ve got to find out what kind of convention is going to be believable. It’s a process of discovery.  The puppets are easily cast, then we have to find out who are we in relation to them, rather than who are they in relation to us.”