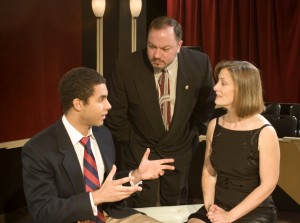 Signal Ensemble’s well-designed, fast-moving production of John Guare’s modern classic about intimacy, identity and our obligations to other human beings succeeds in bringing to life the play’s characters and humor but misses the mark emotionally. The problem starts immediately with the first scene of a frantic Upper East Side couple struggling to come to terms with being taken in by a young black con artist who calls himself Paul; their absurd search for possessions and posturing in his-and-hers satin robes and dress shoes sets a farcical tone that’s further underscored throughout the show, especially with the appearance of the younger generation in the play, over-the-top spoiled college students who squawk without restraint at their parents; and a funny but utterly distracting chase scene between the rich couple and a totally nude male prostitute whom Paul has brought to their home. The problem with these elements of absurdity and spectacle is that they eclipse the important relationship of the play, which is that of Paul and the wife who comes to feel responsible for him, even to love him (and whose line “I am a collage of unaccounted-for brushstrokes” glosses this production better than her famous monologue about the torture of human relationships) These two actors, especially Bryson Engelen in a admirable performance, struggle to express their connection, but by then the audience is just waiting for the next laugh. (Monica Westin)