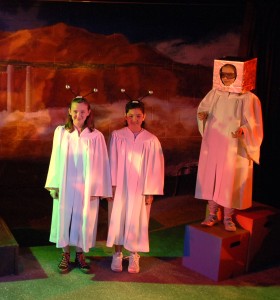 Look closely at any religion and it’ll seem ridiculous. The Bible is chockablock with the bizarre and unlikely. Most people are fine with it, I would argue, because these stories have become normalized. Get enough folks believing in something and suddenly it doesn’t seem insane.

Personally, I think it’s all hooey. Give me rational individualism any day. But I get why people gravitate to religion, and why others clutch at it with white knuckles and unwavering conviction. Life is tough and fucked up; religion offers structure and solace and a code of conduct spelled out in no uncertain terms. Religion is the answer to all the questions nagging at the corners of your mind. It defines and shapes your outlook on life, and I’d put my own agnostic atheism in that boat, as well. It’s all a type of religion, no matter what you call it.

Which brings me to “A Very Merry Unauthorized Children’s Scientology Pageant,” a weirdly entrancing musical from 2003 currently in a totally modest, totally stupendous production at A Red Orchid Theatre. The cast is comprised entirely of preteens and, geez, these kids are hilariously cute. Najwa Brown plays the spunky narrator: “Today we relate the life of L. Ron Hubbard,” she solemnly intones.

The show is a half-snicker away from full snark, but directors Lance Baker and Steve Wilson have done something very cagey here. (The show is created by New Yorkers Kyle Jarrow and Alex Timbers.) Their child actors play it straight—with those super-duper smiles and an amateurish kiddie-pageant performance style—but there is something much deeper and more affecting going on here.

Look, far as I’m concerned, the Church of Scientology is ludicrous. But no more so than any other religion. You think aliens are a stretch? Then why is a “sky god” so easy to swallow, as Bill Maher might say? Religion is an elaborate con job. That doesn’t mean it’s bad.

We all have an emptiness that needs to be filled with something, and L. Ron—which sounds like “Elron” from the mouths of these kids—wasn’t exactly off the mark when he pointed to emotional baggage as one of the roadblocks to a happy life. His methods are nuts, granted, and it’s hard to see his church as anything more than a money-and-power-making venture. But the religion resonates with someone. A lot of someones, actually. It seems hypocritical to treat it as any more of a joke than other religions.

And that’s what makes the show work. Directors Baker and Wilson openly acknowledge the wackness that is Scientology, but they don’t treat it as a punchline. They do, however, have an awful lot of fun with it. The kids explain the bizarro auditing process with a perky puppet show. They dance the robot. They sing their little hearts out and clap to the music and I defy anyone to resist their enthusiasm. Aria Szalai-Raymond (in a brief turn as Mother Hubbard, plus a harried New Yorker) has a very mature energy that stands out—she is poised but funny. And Chaz Allen, as L. Ron himself, is strangely, perfectly in command. I can’t remember the last time I saw young actors this good.

But the show is so much more than a stupid comedy about Scientology. Jackson Callinor plays an old army buddy-turned-IRS agent looking to bring L. Ron down, and there are wells of emotion just beneath the surface of his face. This kid is a real actor and he brings a palpable soulfulness to the role. L. Ron works his magic, but the end result leaves Callinor’s character just as bereft as ever. Which path to take? And then, blackout. Wow. (Nina Metz)